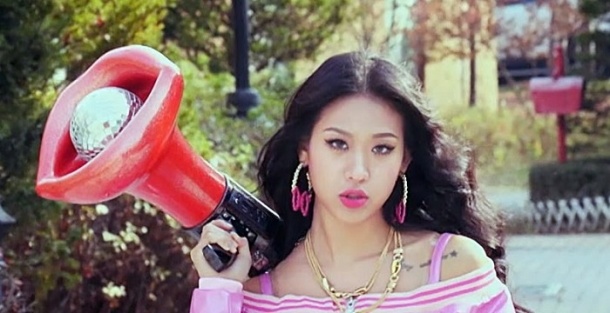 Nada is the latest act to utilize her newfound fame from variety show Unpretty Rapstar to jump start a solo career. Prior to her runner-up status on the series, she was known primarily as a member of girl group Wa$$up, though she had previously released a solo single as well. Wa$$up have had a hard time finding a substantial audience, despite their harder-edged sound being quite unique among k-pop girl groups. Seorae Village (서래마을) will probably do little to rectify that, but it’s still a nice enough piece of melodic hip-hop.

Nada almost comes across as a Korean version of Lil’ Kim in the video, minus the blatant sexualization and unfortunate plastic surgery. She has a similarly playful flow and spitfire delivery that makes the track equally appealing for fans of rap or pop. It’s an assured performance, even though it may not end up being all that memorable in the long run. The central hook follows suit, offering a catchy sing-along refrain without reinventing the wheel. Flourishes of brass underline Nada’s sing-songy appeal, giving Seorae Village a real braggadocious sound.

The song’s biggest issue is that it doesn’t do enough to stand out. It’s a fun ride, and an effective blend of old school hip-hop and pop, but everything — from the beat to the hook — sounds somewhat recycled. There’s no shame in doing what’s worked in the past, and the fact that Seorae Village is created by a solo female rapper is novel in-and-of itself. But for Nada to really blow up on her own, I feel like she needs a song that’s a bit more inventive.