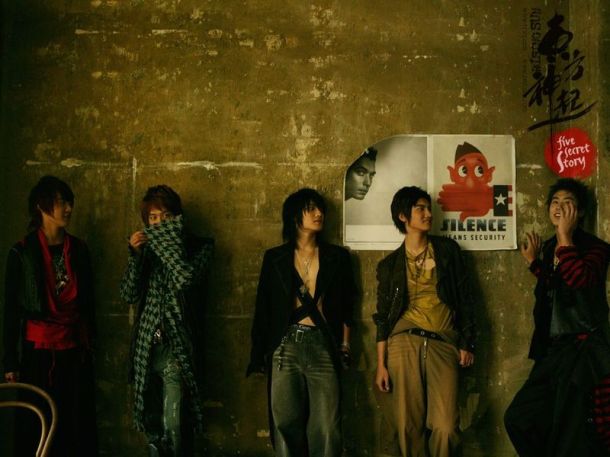 As one of k-pop’s most legendary groups, TVXQ needs no introduction. Today’s idol world strives for big numbers and a big sound, often bloating groups to twelve or thirteen members. TVXQ (or DBSK, as they were known at the time) had only five vocalists — and yet still Rising Sun manages to sound more immense and ambitious than anything produced in recent memory. The song feels like thirty minutes of ideas stuffed into a tight four-and-a-half minute package. It’s bursting at the seams in the best way possible.

Yoo Young-Jin is one of modern k-pop’s earliest hitmakers, rising to fame with material composed for first generation groups like H.O.T., Shinhwa and S.E.S. Despite being one of the architects of k-pop’s distinctive sound, his music can be polarizing. But for those of us who adore his experimental, staccato mix of hard rock and dance pop, Rising Sun is his magnum opus.

Despite working mainly in the dance pop and r&b genres, SM Entertainment’s output has always had a strong rock influence. Rising Sun takes those elements and turns them up to eleven. From the galvanizing cries that open the track to the tortured screams that bookend the song’s first few lines, Rising Sun wastes no time establishing itself as a bombastic blend of theatrical rock and more traditional k-pop.

From there, the track briefly touches on hip-hop before segueing into a softer, more melodic verse. The first time through, these sudden tonal shifts seem jarring, but soon the song explodes with its militant chorus. Young-Jin has always been a master of layering and arranging vocals to give a song as much power as possible, and he’s yet to find a better match than TVXQ’s quintet of power vocalists. Rising Sun‘s chorus resounds like a choir of hundreds.

But as awestruck as this moment leaves you, my favorite part of the song has always been its post-chorus, “somebody talks” refrain. The balance of extended notes countered by a more clipped delivery perfectly blends with the dance rock crunch of the instrumental.

Perhaps Rising Sun‘s most impactful aspect is its willingness to experiment with form. Just when you expect the second verse to revert back to the song’s opening moments, TVXQ throw us for a loop as extended power notes sweep away the instrumental and transition to a bhangra-inspired breakdown that boasts a completely different sound than the rest of the track. It shouldn’t work — and the first time  through it barely does — but the interlude offers the perfect break between Sun‘s more powerful moments. Just like every element surrounding it, you get the feeling that entire tracks could have spun out of the song’s inventive arrangement.

But of course, that’s not what happened. So what we’re left with is a watershed moment for the genre, informing dozens of tracks that would follow. That a structure this far from the mainstream went on to become TVXQ’s signature song is an incredibly happy surprise, and we’re unlikely to ever hear a track quite like this again.

And that’s what makes Rising Sun a Legendary Song.