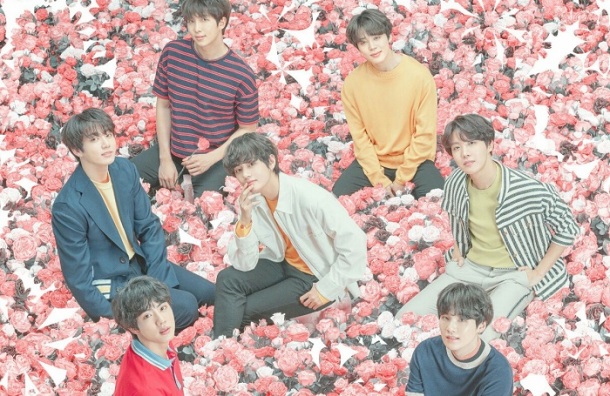 Where does an idol group go after they’ve reached the pinnacle of success? So many pop culture phenomena plateau at this point, or – worse yet – come to an abrupt end. My favorite era in any artist’s career tends to match their gradual ascent to the top. Once expectations and attention climb too high, it’s difficult for even the most talented of acts to measure up. This tricky spot encapsulated much of BTS’ 2018. The guys had secured an unprecedented international audience. They were (and still are) at the top of their game commercially. Yet, I often found myself longing for their 2015/16 energy – when mega-stardom was just out of reach and their names weren’t on the lips of every Western pop star imaginable.

Because of this, I was concerned to see that Boy With Luv (작은 것들을 위한 시) would feature an American duet partner in singer/songwriter Halsey. There’s nothing wrong with cross-country collaborations, but I’m always hesitant about K-pop’s globalization robbing it of its unique touch. However, BTS have played it smart. Not only does Halsey blend surprisingly well, but the song itself resists the urge to simply repeat the sound of their previous singles. Instead of bigger, Boy With Luv goes different – and that’s the best thing a group at BTS’ level can do.

Taking a cue from agency-juniors TXT, Luv paints an upbeat, disco-infused slice of funk-pop perfectly poised to take on the summer. Years down the road, I doubt it will be considered one of BTS’ iconic singles, but that’s okay. The group has already established themselves in this regard. Instead, Boy With Luv is pure fun, grooving on an irresistible bed of sunny synths and rhythm guitar. The vocal arrangement has a wispy quality throughout. It’s densely layered, but never anchored by one commanding tone. This creates a sense of brisk movement, as if the entire track is wafting just beyond the tips of your fingers. This ephemeral approach could easily result in a forgettable performance, but it suits the guys’ airy vocal aesthetic.

Boy With Luv doesn’t hit as hard melodically as TXT’s excellent Crown did, despite sharing a similar vibe. The hooks stick immediately, and will likely stand the test of time. Yet, the breezy chorus lacks the impact of BTS’ best work. The rap line compensates, though I wish the song would have opted for a less trendy flow during the second verse. You all know how much I hate post-chorus tempo shifts! This one felt particularly jarring.

Still, Luv arrives as a pleasant surprise — a feel-good track unencumbered by layers of theory-baiting lore or concessions to trend-driven radio playlists. Sometimes all you need is a nice beat and a good melody. K-pop could always do with more of this sound, and BTS are at a point to influence the entire industry — just as they have time and time again.