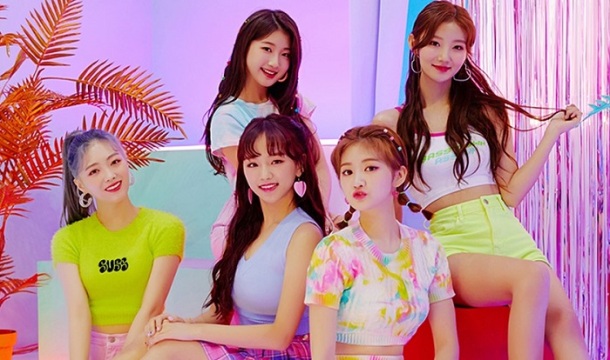 Saturday feel like a group in search of a novelty hit. I mean, any act who debuts with something called “MMook JJi BBa” is not looking to forge the next Stairway To Heaven. No, Saturday are in it for the short term, drawing attention with the most garishly upbeat fare they can muster. This approach has resulted in some fun tracks, but little staying power. Gangnam Styles and Bar Bar Bars are rare to come by, and none of Saturday’s candy-coated material has yet made waves with the general public.

New single BByong (뿅) keeps the group’s onomatopoeia tradition alive, but takes the easy route rather than tackle the kind of engaging pop playfulness that can make a novelty hit really land. Its structure is pure K-pop template, from the incessantly aegyo vocals to the repetitive brass loop that powers the instrumental. BByong feels like reheated Momoland, two nights too late for the resulting product to retain much flavor.

The girls are certainly up for the concept. Their constant asides and bratty sing-talk are full of life, even if the arrangement forces them into the most familiar of K-pop tropes. The song’s chorus is catchy, but its reliance on expressive speech over full-fledged melody makes it feel too throwaway. As if checking off a “K-pop 101” rubric, BByong forces itself into an awkward trap breakdown during its eye-rolling bridge. It’s these moments that restrain Saturday’s ability to find their own voice. The song gets by on exuberance, all the while eliciting pangs of longing for groups like Orange Caramel and Crayon Pop, who were able to harness this same goofy energy into something wholly original and weirdly transcendent.