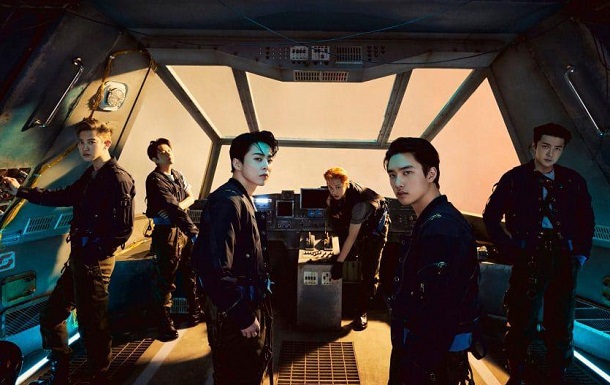 With four members currently enlisted in the military, EXO have released their first album in nineteen months. Don’t Fight The Feeling arrives with much anticipation, including my own. As one of my gateways into K-pop, EXO hold a special place in my heart – so much that I’ve written about every single track they’ve released! And with teasers that pointed toward a funk-inspired comeback, that anticipation grew even stronger.

Don’t Fight The Feeling’s tricky first listen spawned excitement and frustration in equal measure, which will come across in this lopsided review. Let’s start with the frustration:

I’m so tired of writing about second verse breakdowns. They’ve become the structural trend that won’t die. K-pop’s ill-placed, energy-sapping trap breakdown isn’t creative, clever or effective. It’s been done thousands of times. By now, it’s become predictable and obnoxious, and it nearly ruins Don’t Fight The Feeling. In fact, it goes against the song’s one tenant, and ‘fights the feeling’ set up by the rest of the track. It baffles me why producers don’t opt for a more interesting way of incorporating rap into their songs. Don’t Fight The Feeling’s second verse plunges into this momentum-killing arrangement twice. Just… ugh.

Now that I’ve purged that from my system, let’s focus on Feeling’s strong points. I think there’s a great song in here, as evidenced by its first verse and chorus. I appreciate what the instrumental aims for, even if it could have been developed further. The bass-heavy groove has a satisfying filtered effect, as if running just underfoot ready to pop up and attack at any moment. The tempo is brisk and exciting (apart from those trap breaks), and allows for an ultra-rhythmic performance in keeping with the group’s strengths. And though the chorus is simple and repetitive, its swirling structure compliments the energy of the production. This segment is helped along by an excellent vocal performance, taking advantage of that classic EXO blend in short, potent blasts.

In the end, I can see myself coming around to Don’t Fight The Feeling big time, but there are moments that will always take me out of the experience. And with dance music — which is meant to get you moving without care or over-examination — that’s a problem. For now, I’ll be cautious with my rating and hope the song’s more jarring elements will grow familiar and welcome with time.