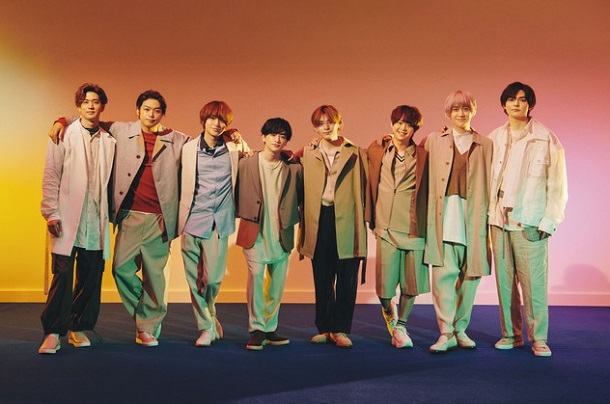 Hey! Say! JUMP have been on an experimental kick since 2019, and I’ve enjoyed watching them grow into their more mature, adventurous style. Of course, “experimental” won’t be for everyone and some musical choices have been stronger than others. New single Gunjo Runaway (群青ランナウェイ) is definitely an odd one, filled to the brim with chaotic, unhinged energy.

As the theme for member Kei Inoo’s new mystery drama, the song’s creepy edge makes perfect sense. After a muted drumline, Runaway’s horror-show strings build toward a frantic beat that instantly gets your heart racing. This intro is nearly forty seconds long, and that ambitious length is well-earned. The instrumental lays the ground for an equally unsettled melody. The track unfolds like some demented carnival – at times intentionally dissonant as a variety of instrumental flourishes push in and out. (Is that accordion I hear in the background?) It’s all quite impressive, yet simultaneously unforgiving. As someone who prefers a clean, crisp sound, Gunjo Runaway’s busy production definitely takes some getting used to.

When we reach the chorus, Hey! Say! JUMP provide an impish performance – their voices layered into a freewheeling choir. It’s quite cinematic, and grows more addictive each time you hear it. But, Runaway saves its best tricks for last. A breathless instrumental forges a dynamic bridge, driven by immense percussion and laced with cathartic guitar. This culminates in a perfectly-placed key change that reignites the song’s energy as we head into its final minute. Manic guitar gives way to bright synth and — eventually — radio distortion. Whatever your reaction may be, it’s quite a ride!