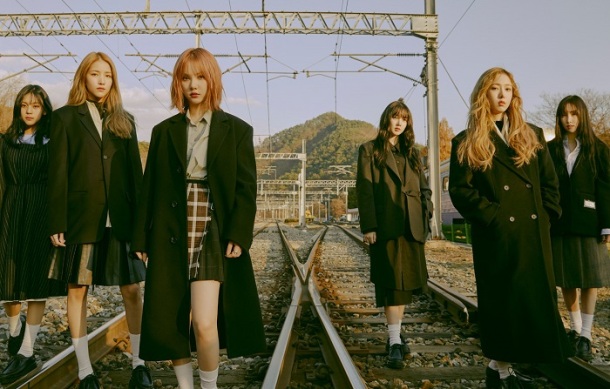 Judging purely by Labyrinth, I’m ready to make the bold statement that GFriend should just let Big Hit’s team of composers take the helm of their music from now on. Not only should it have been their title track, but it’s the strongest the group has sounded in years. This is the kind of female-fronted K-pop I’ve been asking for. Propulsive beats, strong melodies, no weird vocal affectations or beat-drop choruses. The industry rarely churns out songs like this anymore, but Labyrinth could easily compete with Kara’s classic singles run.

The track draws strong influence from J-pop, but not the kind of ornate, wistful fare that inspired GFriend’s new single Crossroads. Instead, Labyrinth hearkens back to the high-energy techno of the late 90’s – one of my favorite J-pop eras ever. It glides on a dramatic instrumental riff that blends just the right amount of hard-hitting synths and electric guitar. Even more importantly, the song keeps this momentum going throughout its entire running time, never pausing for some ill-conceived breakdown or energy-killing bridge. I can’t stress how refreshing this is.

Labyrinth’s chorus is a thing of beauty. It’s impactful and immediately catchy without growing cloying. It also takes better advantage of GFriend’s vocals than almost anything they’ve recorded. The girls never opt for cute or innocent or quirky in the way that K-pop too often demands. They simply sing, and do so brilliantly. Of course, huge credit has to go to the song’s many composers. Of the eight (!) collaborators listed, one name especially stood out to me. Frants was responsible for tracks like Sunmi’s Siren and Wonder Girls’ Candle. Taking Labyrinth into account, I think we need to force him to work with as many idol groups in 2020 as possible.