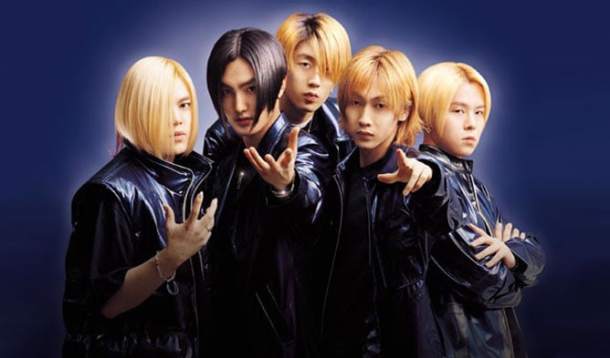 With over 3,000 songs on my iPhone’s “K-Pop Singles” playlist, I thought it would be fun to add a bit of unpredictability to my song review posts. So as a result, we have the “Random Shuffle Review” feature.

Apart from the colorful SoBangCha, K-pop’s first big boy band boom coincided with a similar trend in the rest of the world. As groups like Backstreet Boys and ‘Nsync were taking over the States, H.O.T had already cemented their place as a driving force in Korean pop. There are some surface similarities, but even then K-pop (and SM Entertainment, specifically) challenged itself to push harder and more interesting. H.O.T’s songs covered a wide breadth of social issues, and many of them drew from unexpected elements like heavy metal and hip-hop.

With this in mind, Hope (빛) is one of the group’s most classic-sounding boyband tracks. And as much as I love their more experimental work, I simply can’t resist a killer melody and emotive performance. Taken from their third album Resurrection, and paired with a mini-drama music video, Hope knows exactly what it wants to be and channels all of its energy in that direction. It could be my nostalgia talking, but as soon as the song’s 90’s hip-hop beat rushes in, a sense of calmness comes over me. The production is simple, taking that groove and augmenting it with strings and sharp synth textures, but the instrumental unfolds with the fervor of a sermon.

However, Hope really comes to life during its chorus. As a relatively new force in the Korean music industry, modern K-pop has few tracks old enough to be considered all-time classics, but Hope’s refrain is one for the ages. It swells in all the perfect moments, conveying a healing energy that leaves room for the guys to deliver a vocal that feels conversational rather than over-rehearsed. Hope’s verses are equally strong, fusing melody and rap together in a complimentary way. The two segments build off each other, crafting a track that never loses its sense of purpose or drive.