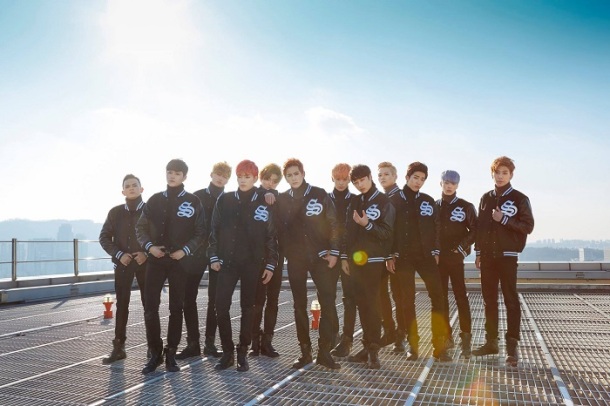 It’s only the first week of 2017 and we already have two newly debuted boy groups. Varsity has twelve members, and is a joint project from Korean and Chinese companies, with a focus on multi-national members and a global reach. This all makes sense from a business perspective, but I’m always surprised that these relatively unproven companies are willing to take the risk of debuting a group with so many members. You’d think the costs would just skyrocket, as opposed to a more streamlined 5-6 member group.

While U R My Only One is a fine piece of imitative modern pop, it fails to answer the central question behind Varsity’s formation: Why were twelve voices necessary to make this happen? Groups like Seventeen and UP10TION can get away with their hefty numbers because they smartly utilize their army of talents to create music that sounds as immense as the groups look onstage. U R My Only One, on the other hand, paints Varsity with a much more modest sound. Part of this is due to the unadventurous instrumentation, which sticks to the tried-and-true effects that worked in 2016 — melancholic r&b chords here, a sprinkling of tropical house there.

The melody is smooth and catchy, though it never explodes with the emotion or drive that could set the song apart. There’s a nice part in the chorus where the beat accelerates before pulling back again, giving the track some interesting texture. Other than that, there’s not a lot of invention at play here. But as a debut, things could have been much, much worse. At the very least, Varsity have shown promise and delivered a pleasant piece of k-pop. Hopefully they can find a way to harness the full power of their expanded roster next time around.

One thought on “Song Review: Varsity – U R My Only One”