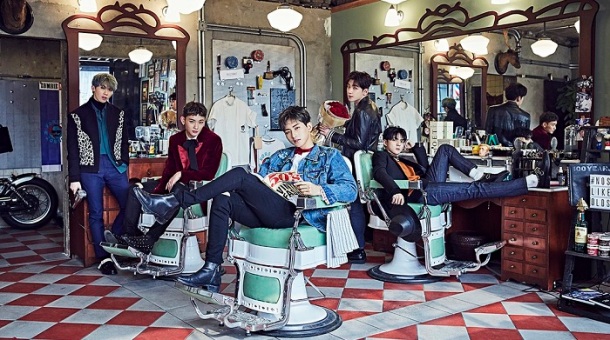 It’s ironic that the title of MAP6’s new single album is Momentum, because I don’t know what kind of momentum their agency thinks the group is creating with their current promotional schedule. Since their debut in 2015, the boys have released a grand total of seven songs in Korea, making only one comeback per year. In the ultra competitive realm of k-pop rookies, this simply doesn’t cut it. Luckily, MAP6 have worked once again with proven hit-making team Duble Sidekick, giving I’m Ready a certain cachet.

The song is a polished, if somewhat generic, stab at rock-infused dance pop. The instrumental opens with a vocal funk sample, immediately painting a specific genre expectation that never materializes. Instead, I’m Ready‘s verses surge forward on a repeated guitar loop that intensifies as the melody builds to the song’s shout-along chorus. While I’m always a fan of prominent guitar use in mainstream k-pop, the track could have done with more raw, improvisational energy. It’s almost as if everything is too polished — to the point where things begin to feel slightly stale before the song has even finished.

This being k-pop, I’m Ready injects hip-hop elements here and there to varying effect. The rap verse leading into the chorus acts as a nice change of pace, but the post-chorus breakdown feels like it was borrowed from another song entirely. Melodically, I’m Ready is as toothlessly radio-friendly as a pop song can be. This isn’t necessarily a bad thing, but its affable nature gives MAP6 very little room to display anything that might set them apart from other boy groups. If they’re going to come back as infrequently as they have so far, they need a track that demands listeners’ attention. I’m afraid this isn’t it.