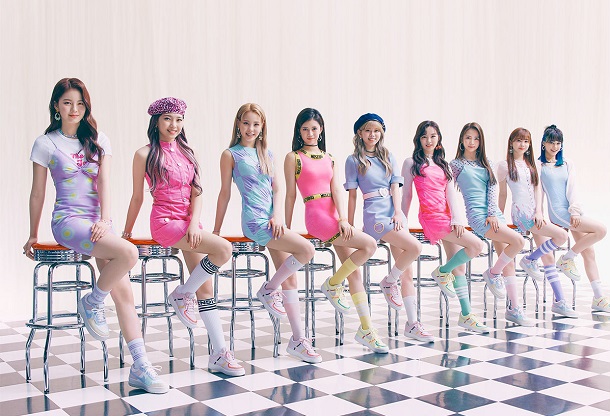 Double a-side singles are common in Japan. Similar to Korea’s double title tracks, they offer a chance for J-pop acts to quickly grow their singles discography. NiziU have immediately followed Take A Picture with its coupling song, Poppin’ Shakin’. It’s becoming increasingly clear that the group’s hyper pop style is rarely going to be for me, but I can appreciate the candy-coated hooks for what they are.

I have the same issues with NiziU’s work that I had with Twice’s early J-pop output. The vocals are pitched high and occasionally out of tune, and the relentless brightness of the music can often feel like children’s programming at its most cloying. So I try to reframe my expectations when going into a NiziU track, intent on identifying the charms that can be extracted from this particular sound palette.

With this new viewpoint, Poppin’ Shakin’ definitely has its selling points. Its peppy synth beat isn’t too far from Twice’s Dance The Night Away, and rides on the same sense of delirious repetition. There’s a surplus of “la la la la” hooks to be found here, but the instrumental supports them with an upbeat drive that goes down easy. And apart from a wobbly pre-chorus, the girls sound pretty solid. Poppin’ Shakin’ stakes its claim on “cute” (or in this case, “kawaii”), the way most of their songs have thus far, but the track never goes over the top. Its percolating groove is a nice match for the group’s charms, leading me to believe that NiziU will eventually follow Twice’s footsteps and grow into a more potent pop sound.