Just based on a casual look through social media, I can already tell that Vancouver’s Exo’luXion stop is becoming infamous for all the wrong reasons. Still, I wanted to give my thoughts since I was in attendance last night. Before I start, I have to preface by saying that, while Exo were actually one of the groups to first get me into kpop back in their debut year, they’re not one of my bias groups. So, going in to this show, I had very different expectations and excitement level than, let’s say… Infinite’s show. But I do really like them and their music, and since they were coming to my neck of the woods, I couldn’t miss out on taking the short drive across the border and seeing Korea’s biggest group in person.

I’ll get the negative over with first, and very little of this has to do with Exo themselves. As some of you might know, the Vancouver stop has quickly become known as the “One Step Back” tour. This is due to the guys’ constant need to chide those in the pit area to stop fighting, fainting and crushing others. Apparently there were injuries and unconsciousness, and the band was even forced to threaten stopping the show early if there were more injuries. This was all incredibly awkward and unnecessarily changed the energy of the night. Thankfully, I was not in the pit section, but the venue as a whole was definitely not suited for a concert.

It’s clear that SM looked at seating capacity rather than layout, and booked a hockey arena that ensured every seat faced the center of the court, rather than the stage itself. This resulted in sideways views of the stage even in the best seats. The acoustics were not great, and it’s clear that the staff had little skill in handling this sort of event.

We lined up shortly after five for a supposed six o’clock opening. The show was scheduled to start at seven thirty, but nobody was let in until about fifteen minutes prior to that. This resulted in the rarest of things for a kpop concert… a delayed start. The show finally kicked off about forty-five minutes later than it was scheduled to. Before that, we enjoyed hours out in the rain, watching the security stand on the other side of the doors doing absolutely nothing. When we finally were let in, security confiscated all umbrellas, saying they weren’t allowed in the venue even though they weren’t on the list of unapproved items. So they basically froze us, drenched us, and then stole from us.

Once inside, the usher next to us quickly became a phone nazi, rushing around from person to person (often obstructing our view), to yell at people for filming or taking pictures. Honestly, I don’t understand the big deal. Are they that scared of grainy photos and video clips from an awkward angle? What’s the worst that could happen? Free publicity? The attitude of the staff felt condescending and unnecessarily rude. I mean, these tickets were not cheap. Let us enjoy the damn show!

Now that that’s out of my system, I should actually talk about the music. Exo were an eight-member group last night, since Lay was not joining this tour. Luckily, Kai got his visa issues resolved (another in a long string of mismanagement issues plaguing this tour). We were close enough to *sort of* see the guys, though the stage could have done with clearer, and better placed, video screens to help with this.

The setlist was strange. We didn’t get singles like Wolf or What is Love, or strong album tracks like Black Pearl or El Dorado, but at one point we got an extended section of holiday songs from their Christmas album… in February. But, at least that gave us the beautiful Miracles In December, which was the highlight of the night for me. It was great to hear the main vocals so clear, with little feedback or production. Chen, in particular, was last night’s MVP. I don’t think I’ve given him the credit in the past for how strong of a singer he is. I was really impressed with his vocal power. It cut through the arena with so much heart and skill. 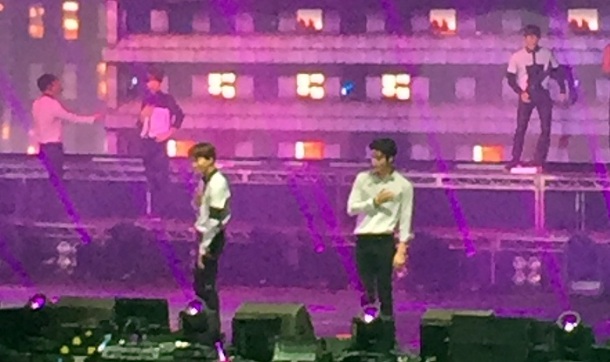 The show lasted nearly three hours (though as I mentioned before, a lot of that was “one step back” chastising). For such a long show, the flow could have been better thought out. We got a blitz of singles right off the bat (Overdose, History, and Mama), and then it became album track mania for a LONG time before we got any more singles. Now, it’s not that I don’t know every one of their album tracks, but it seemed a waste not to spread the big crowd pleasers out a bit more. I always find it takes a bit to ease into a concert, and I would have loved to be able to focus more on History and Mama in particular, as they’re two of my absolute favorite songs.

In the interim between hit singles, we had a cutesy subsection (with regrettable styling/staging, but awesome songs), a strange coffee-making elvish video clip (druggy. as. hell.), an EDM/hip-hop rave, lots of pandering to the 13-year-old-girl fanbase and of course that aforementioned Christmas bit. Throughout this, my highlights (and the songs that worked the best in the arena), were Lucky, Machine, Exodus and Run. Exo were definitely best when they focused right up front, delivering a powerful or anthemic performance, rather than ducking behind a cheap-looking paper crawl in a “striptease” bit or heading all the way to the back of the stage so that they were hard to see for most of us. They’ve never released their rockier tracks as singles before, but they worked really well in front of a crowd. 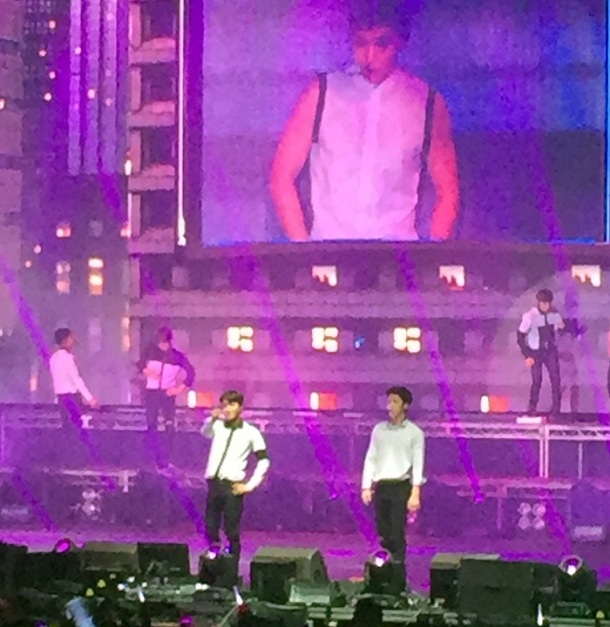 The group closed with Call Me Baby, Love Me Right, Growl and Unfair, which were all a blast to see live. I’ve had my own criticisms of Exo in the past, but they impressed me as a vocal group — particularly the main vocals. Baekhyun’s piano-playing during The Answer (I think?) was also a bit of a revelation. I was less impressed by the dancing. The formations often felt sloppy and out of sync, especially during the first few songs. This could have been partially because of my vantage point, but I’ve always felt this way about Exo. I think they have a couple incredible dancers that absolutely nail a solo performance, but as a group they sometimes have trouble becoming one unit. Given their difficult history, this is more than understandable!

All in all, it was kind of a strange night. Enjoyable, yes, but the venue, setlist and staging didn’t really befit Korea’s “biggest group.” Of course, that label is nearly impossible to live up to, and I don’t want to be unfair in expectation. Even though the show as a whole felt uneven and a bit thrown together at times, there were definitely highs and I’m very glad that I went and had a chance to see Exo so close to home! (And sorry for the grainy photos… I had to zoom in and avoid the phone nazi when taking them…)

4 thoughts on “Review & Recap: EXO Exo’luXion in Vancouver, BC”