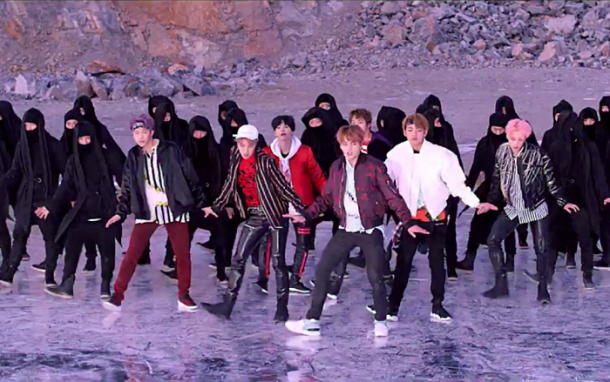 Ever since 2015’s I Need U and Dope, BTS have been successfully dominating their release cycles with a juxtaposition of more melodic material with harder-edged blasts of hip-hop dance. That approach continues with their newest repackage album. Last week we had the emotional, rock-infused balladry of Spring Day before Not Today rumbles in to slam listeners with its call-to-arms bombast.

Not Today is in the same vein as last year’s Fire, so much so that on first listen the two seem to follow nearly identical production and structural patterns. For those hoping to hear something different from BTS, this will likely be a bit of an eye-roll, but the group is clearly working with a sound that they excel in. It’s hard to fault them for that. And luckily, further listens draw out Not Today‘s unique points. Right from the gladiatorial fanfare that opens the track’s raucous instrumental, it’s obvious that the goal was to take Fire‘s sledgehammer spirit and blow it wide open for a rousing, cinematic result. Even its verses, with their syncopated, percolating bass, barely take a moment to breathe. There is no subtlety here, but that’s the point.

By the time we enter the wind tunnel build of Not Today‘s pre-chorus, it’s hard not to be whipped into the frenzy the song so intently cultivates. It’s a rallying cry from start to finish, less concerned with hooks or melody than it is with sheer punches to the gut. This approach blunts some of its charm when compared to the group’s more versatile releases, but as a pure maelstrom of energy it’s among BTS’s strongest moments. And even if part of me wrote the song off as a Fire copycat during my first few listens, the large-scale, tour de force music video ultimately made me a believer.