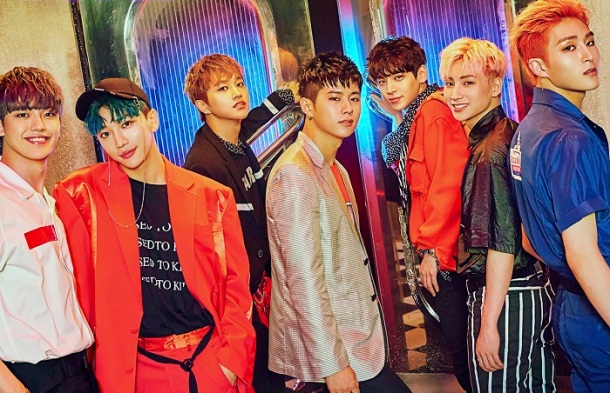 In an unexpected twist, rookie group IN2IT seem to be finding their niche with a campy, concept-driven brand of dance pop. April’s Snapshot introduced this style with its catwalk appeal and voguing choreography. Now, the group has doubled down on the flamboyant fun with head-turning title track Sorry For My English.

As the title of their new single album (Into the Night Fever) suggests, this is very much a disco pastiche. In my opinion, we can never have too much disco in K-pop, but English feels a bit too wink, wink, nudge, nudge comedic to have much staying power. Its instrumental is the star of the show, pulsing with a shimmering dance beat that takes full advantage of its colorful concept. The combination of rhythm guitar and brass during the hook is pure ear candy, and even the tempo-changing breakdown during the bridge works well.

Unfortunately, this is all in service to a melody that doesn’t offer much to sink your teeth into. The repetitive chorus threatens to get old before the song has even ended, stretching its titular refrain to the breaking point. The verses — and especially the falsetto-led pre-chorus — are stronger, hinting at a true disco hit that didn’t need to rely so strongly on one gimmick. I appreciate the attempt to recreate a Bboom Bboom-esque viral hit, and I think this general sound is a great fit for IN2IT. I just wish the song didn’t feel so much like a parody. Disco is already an oft-ridiculed genre, but can be transformed into something quite spectacular with the right touch.

2 thoughts on “Song Review: IN2IT – Sorry For My English”