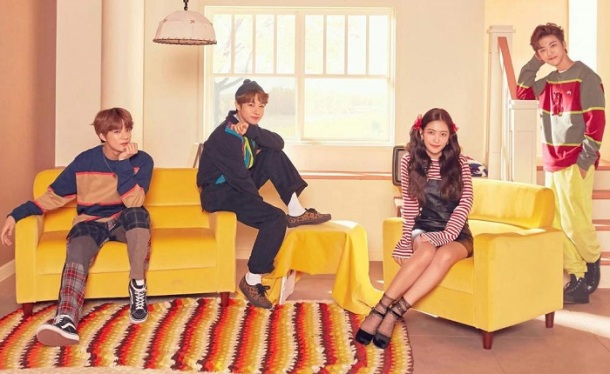 I debated whether or not to review Hair In The Air. It’s essentially a Korean-language cover of an American song, taken from the soundtrack of Trolls: The Beat Goes On Netflix series. And that original version is as insipid as it gets — an overly upbeat theme song that would instantly have me reaching for the mute button. Yet, the Korean redo is an interesting example of what happens when you bring in superior performers and swap the language. Suddenly, the track goes from unbearable to addictively fun.

To be fair, if I was fluent in Korean I’m sure I’d find the translated lyrics to be just as cloying as the original. But, I have the benefit of ignorance in this regard, and that lets me enjoy Hair as the harmless funk-pop fluff it is. It was a brilliant idea to pair Yeri (Red Velvet’s youngest) with a trio of NCT Dream members (Renjun, Jeno and Jaemin). It might have been challenging for some of the agency’s older artists to convincingly pull off a track like this.

It’s nice to hear rhythm guitar being used prominently in an SM Entertainment track again. Hair’s disco sheen is a refreshing change of pace from the darker tones the agency has developed of late. Though still extremely poppy, the instrumental possesses more grit than the original thanks to some well-used filters and greater variation in the tempo. This version also breaks up the potentially grating melody with a series of playful rap verses that play to Dream’s charisma. Yeri’s voice is most prominent throughout, but she blends with the guys for effective harmonies that deepen the appeal of the chorus. At its best, the idol industry has the power to take western pop and improve on it. This is about as clear an example as you’re likely to find.