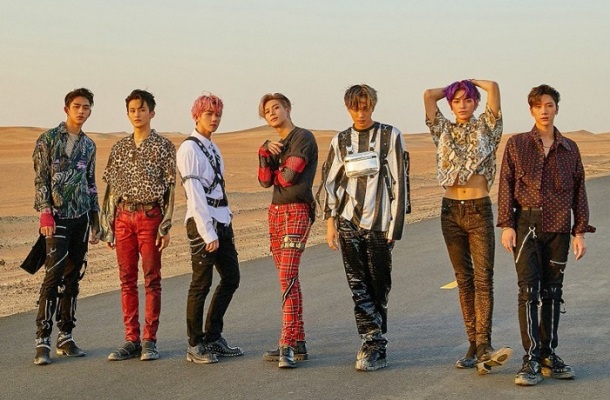 When SM Entertainment announced their SuperM project in early August, my first reaction was an eye roll.

This had nothing to do with SuperM’s concept, which grafts together members from popular SM acts to create a K-pop super group. I actually think that’s pretty cool. Where else are you going to see SHINee’s Taemin, EXO’s Baekhyun and Kai, and NCT’s Taeyong, Mark, Ten and Lucas in one place?

My hesitance came from the fact that SuperM would be targeting the U.S. market, presumably with performances in English. I’m one of those annoying K-pop fans who isn’t sold on the industry’s obsession with American outreach. But, I’ve always been this way with pop music. I love nothing more than the thrill of discovery. I’d prefer that fans come to K-pop through their own accord, rather than have it force fed to them by some U.S. company who sees it only as a trendy cash-grab.

With this in mind, I’m happy that SuperM’s debut single Jopping isn’t simply an attempt to replicate current American musical trends. If anything, the track is antithetical to the presumed desires of the U.S. market. It’s big and brash and weird and campy, and destined to polarize opinion. Jopping was produced by Bias List favorites Yoo Young-jin and LDN Noise, alongside an unnecessarily large stable of co-composers. It’s the sound of SM Entertainment going wild. Like it or not, they’ve thrown all of their most off-kilter musical hallmarks into a blender. The result is messy and loud, with chunks and pieces that don’t always fit together the way we might prefer.

But, you know what? I like the track. Early online reactions seem to be over-the-top negative, which makes me wonder if some had made up their minds before even pressing play. This feels like Red Velvet’s Zimzalabim all over again. Disjointed, borderline-cringey tracks like this tend to elicit dramatic backlash. But, I come from a K-pop era that was filled with this kind of bizarro material — and I honestly miss it. The demands of a digital music industry — where streaming is king — has caused too many songs to kowtow to consensus-building and lose their WTF edge. Jopping is certainly a big WTF, and I think that’s an asset.

With a title like “Jopping,” you already know the English-language lyrics are going to be bad. Fortunately, most of them are indistinguishable, and there’s enough Korean thrown in to give the track a distinctly K-pop aesthetic. The members’ individual talents aren’t utilized to the best of their ability, but that’s almost unavoidable when cramming the agency’s biggest and brightest into one four-minute pop song. I would have loved to hear more focus on melody rather than hip-hop, but I understand the desire to highlight performance over vocals.

Opening with the din of an adoring crowd, Jopping quickly delivers a stadium-ready spiral of distorted synth. It’s like we’ve been welcomed into the thunderdome — an idol versus idol battle to the death. This bombast fades soon enough, replaced with an electronic throb that underlines the verses. Trendier tracks might have substituted depressing future bass lurches or trap hi-hat in place of this bright, bouncy dance beat, but I’m so glad that Jopping sticks to its guns. Detractors might call its club-ready sound “dated,” but I love the energy of these verses. The upbeat production gives the hip-hop a pop sheen, and connects well with the more melodic pre-chorus.

The coliseum-ready introduction returns for the chorus, along with some truly lame English-language lyrics. The first time through, I wasn’t sold on the tempo shift here. I craved an explosive, larger-than-life chorus. Instead, the momentum staggers as the song sidelines melody in favor of a half-baked chant that aims for anthem status. It’s only partially successful, but I can appreciate the ambition. I like all the histrionic vocal ad-libs that circle this segment, and Jopping sparks some real fireworks during its final moments. The instrumental swerves and shifts, closing the track in a fury of distorted guitar that should have lasted a few more measures.

Ultimately, no song could have lived up to the unwarranted, months-long hype SM has been giving SuperM. And even without those expectations, Jopping could be stronger in many ways. But, it’s the first release in many weeks to capture the uniquely oddball K-pop energy that used to be a staple of the industry. It’s ridiculous that this arrives courtesy of a track designed for a non-Korean market. But then again, 2019 has been a strange, shocking year for K-pop. In that regard, I suppose Jopping fits comfortably within the madness.