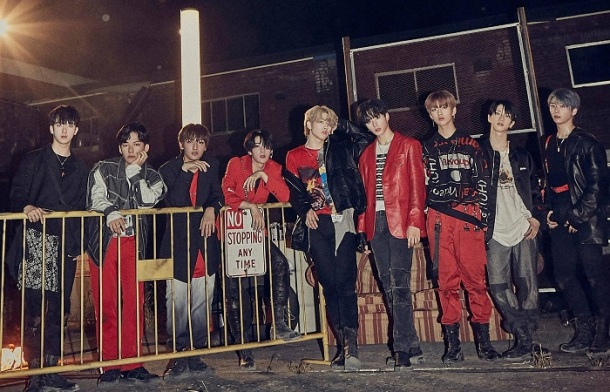 Like too many groups of the new K-pop generation, 1THE9 has an expiration date looming over their heads. That’s the drawback of being formed through a competition survival show. You get the initial exposure, but once your project group has finished its contract, all bets are off. 1THE9 are nearing the end of their 12-month promotional life, and I wouldn’t be surprised if Blah Blah ends up as their final mini album, making its apathetic title even more unfortunate. You simply can’t forge a meaningful sound or purpose in 12 months, so blah blah indeed.

Title track Blah (…I can’t believe I’m typing that word so frequently), is about as galvanizing as you’d expect, lurching to and fro with the kind of moody blend of fitful electronics and clattering EDM percussion that has become synonymous with so many current boy groups. It’s hard to take any of it seriously, especially since their own debut Spotlight saw them spending “like merry-go merry-go merry-go-round” only months prior. I guess they ran out of spending money. That would explain the newfound angst.

There are some decent melodies here, particularly during Blah‘s slow-burn verses. I can imagine a much more interesting version of this track, where all of its overly-familiar production elements have been replaced with unique and engaging synth work. But alas, 1THE9’s producers know their template too well and Blah ends up as a slavish follower. I hope the boys are given a more unique swan song than this, because Blah does little to show what kind of a group they were capable of becoming.