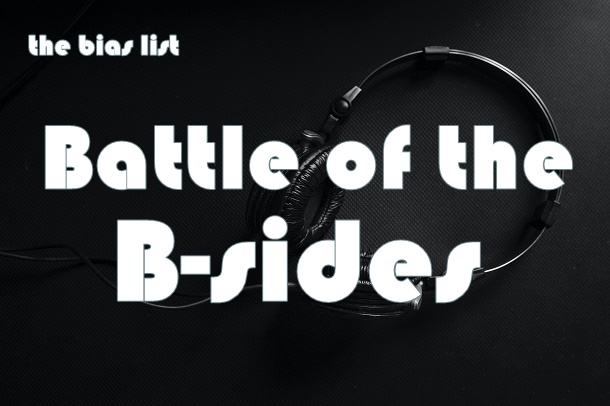 K-pop’s title tracks might gain most of listeners’ attention, but many album tracks are worth equal spotlight. I call these “buried treasures.”

Beyond this, K-pop’s albums deliver thousands of additional tracks that settle for a more limited audience. It’s these songs that will become a part of my “battle of the b-sides” feature.

In this feature, I’ll be putting on my A&R hat and taking a listen to five randomly-selected K-pop b-sides. I’ll write a mini review for each, including a Bias List rating, and rank them from least to most favorite. The winner will join a special Bias List B-side playlist. Think of it like my own little agency, hand-selecting songs I’d like to pitch to my nonexistent artists!

You can check out all rounds of my Battle of the B-sides here!

Battle of the B-sides: Round Thirty-Two

Dropping SHINee into a “battle of the b-sides” mix is almost unfair. They’re basically kings of b-sides, and their entire Story Of Light album would be very competitive in any match-up. With that said, I remember being underwhelmed the first time I heard this track. You all know how it bugs me when choruses lurch into half-time, and All Day All Night’s perky verses seem to promise a centerpiece that’s equally energetic. However, SHINee’s incredible vocal blend more than compensates for my issues with the instrumental. Their voices form a towering sucker punch, driving the track with both power and emotion.

Answering SHINee’s challenge, Miss A is up next with a strong b-side. Ooh, this is gonna be a good match-up! Time’s Up conforms to many of the production tropes of its era – namely, that LMFAO-style electro wiggle that was a particular favorite of Brave Brothers’ productions. This is not a Brave Brothers production, but follows the template to great success. I love the bounciness of the instrumental, especially when the girls’ vocals join the percussion in a rhythmic structure. The verses aren’t all that memorable, but the air clears for a standout pre-chorus and super fun drop.

Yep, this is going to be a strong week. There’s no messing around with Girls’ Generation’s J-pop b-sides, and I’m In Love With The Hero is no different. The electro pulse that fuels this track is nothing short of beguiling. The drumline percussion makes an unexpected bedfellow, but the song is all the stronger for it. The chorus has great surge. It’s a simple melody, but arranged to feel intense and cathartic. And as usual, the girls sell every moment with addictive confidence. The track even makes room for some experimental turns, ensuring a sense of spontaneity.

It’s about time my randomizer selected a ballad, though BTOB’s Broken Heart has a satisfying 90’s groove that makes it more of a slow-burn than an OST belter. This sound is the group’s bread and butter, and they can always be counted on to deliver the goods. Their discography holds stronger examples of this style, but I still think this is a solid track. It’s always a pleasure to hear the guys cut loose and bring the vocal firepower. The arrangement here is very satisfying, allowing BTOB to imbue intensity into every moment. I only long for a more memorable melody.

There are an alarming number of great K-pop songs with the title “Hide and Seek,” and I think we can safely add SF9’s effort to the list. Their current work is often sleek and serious, but this takes us back to a more effusive pop sound. Hide And Seek has a nice brassy swing, augmenting the typical “bright” boy group style with a live band feel that injects plenty of energy. The guys were pretty early into their career when this was recorded, and it fits their youthful charm well. Hide And Seek also allows for some fun vocal riffs that bring an improvisational spark to an otherwise straightforward effort.

First: Girls’ Generation – I’m In Love With The Hero

Congratulations to Girls’ Generation’s I’m In Love With The Hero – the thirty-second winner of my Battle of the B-sides!

Readers, what do you think? Did you discover any hidden gems? Leave your own ranking in the comments!

9 thoughts on “Battle of the B-Sides: SHINee, Miss A, Girls’ Generation, BTOB, SF9”