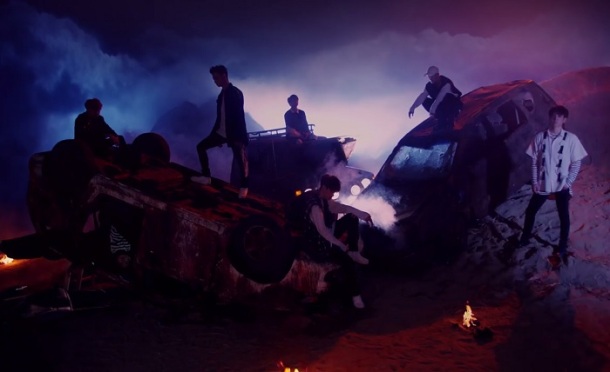 After my disappointment with March’s Fly, I was afraid that GOT7 were moving in a musical direction that just wasn’t going to be for me. Hard Carry (하드캐리) does little to assuage those fears… but at least it’s a much stronger release. And while I long for the sound of their excellent 2015 material, a hype track was a smart move after Fly dulled their usual energy. Fans of both groups would likely bristle at the comparison, but there’s no denying that this is GOT7 trying on BTS’s Fire and seeing how it fits.

Turns out, it fits pretty well. It doesn’t have quite the melodic or instrumental ease of Fire, but Hard Carry doesn’t embarrass, either. The guys kick things off with a heavy, trap-influenced beat that has become quite familiar by now. I could go on and on with a list of boy groups who have used this basic template, so it’s to the song’s testament that it doesn’t come across as completely stale. This said, I breathed a sigh of relief when the chanted vocals came in during the first chorus. Simplistic as they are, they’re necessary to providing the track with some individuality. But as central refrains go, “hard carry” is an awkward one. As far as I can tell, it’s not a widely used slang term, and to be honest I’m not entirely sure what it’s meant to mean beyond “we’re awesome.”

Regardless, the beat hits hard. Yes, it’s derivative, but that thunderous explosion of drums that ignites the chorus does its job well. Beyond that, I found the first verse a little awkward and limp in execution, but the second one makes up for that, adding much needed melody to what isn’t a particularly melodic song. The build-up to the final chorus is also effective, though the song never feels like it builds to much of a climax. We needed a new element towards the end — something more than the repetitive chants that we get. BTS had that awesome double-time kick in Fire‘s final moments. GOT7 needed to bring a sense of anthemic heft to close Hard Carry with the aplomb it deserves. But even with these quibbles, the sheer energy of the track is a step in the right direction.