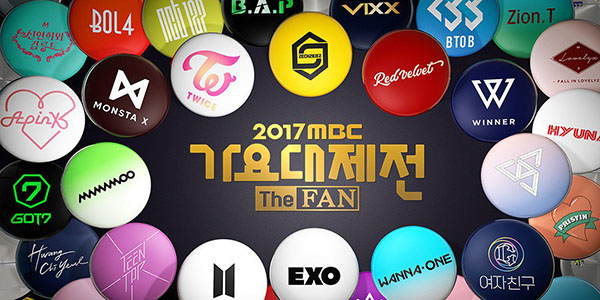 MBC’s Gayo Daejejun had the best theme of the three end-of-year specials, and as usual it had the most stacked line-up. But I can’t help but feel like it lacked the kind of watercooler moments that make these specials so thrilling.

The idea of pairing idol groups with fans resulted in some really endearing performances. Though they’re not on my top ten list, I loved seeing the dance students with Gfriend, the father/son interaction with BTOB and the tween band with Monsta X.

There were some things I missed this year. MBC’s second stage was ridiculously small, which limited many of the night’s performances. And although idols were sitting behind the in-studio performance area as usual, I feel like the camera didn’t take full advantage of this. One of the things I love most about this MBC special is watching idols geek out over their peers’ performances. There was little of that happening tonight. Or if there was, we didn’t really get a chance to see it.

All in all, the winner of this years Gayos has to be KBS. I can’t stop thinking about that jaw-dropping Seventeen performance in particular. In second place would be SBS, with their incredible staging and covers of 90’s classics. And for the first time that I can remember, MBC takes bronze.

It was a treat to finally see a live stage of Universe, and the laser show that highlighted their dance intro made for some dramatic staging. Ko Ko Bop was a real questionable choice for the night’s last song, though. I love it, but it’s hardly a climactic moment.

The Michael Jackson remix/mash-up worked surprisingly well, and the girls rocked what little stage they had.

I love when they do these end-of-the-year mash-ups. Mamamoo was (unsurprisingly) solid, but Duetto’s operatic versions of girl group hits stole the show. If anything, this segment was far too short.

There were a ton of cool artist/fan collaborations tonight, but the simplicity of this idea was totally charming and fun to watch. Kudos to the fans, who had to remember nearly as much choreography as Astro!

From my perspective, Winner seemed to be the first idol group to pump up an audience that seemed a little hesitant during the show’s first hour or so. They have such an effortless stage manner that has only recently been capitalized on. It’s fun to see them in their prime.

Wanna One have been such a force throughout all three gayos, and while this didn’t come close to their KBS performance, I thought that Wanna Be was one of the night’s most unabashedly fun moments thanks to the very game audience and their fangirl energy. It’s the kind of crowd-pleasing song that works very well for occasions like this.

This was such a great pairing that it’s impossible to separate the two even though they performed on two different stages. Without a doubt, the fiercest ladies in k-pop right now. Both oozed charisma throughout their sets, and I loved that they chose to open with older hits before transitioning to new material.

The incorporation of their fans was adorable, and felt like one of the more genuine collaborations of the night. But Love Is was a showstopper, building from a symphonic mid-tempo to dramatic remixed dance track. This was a song that didn’t receive the attention it deserved in 2017, and I was happy to see it enjoy such a dynamic spotlight.

Dynamite choreography and energy from these guys, and the night’s best use of (literal) fans! Seriously, though, the extra choreography was really cool and they just seemed recharged. I guess performing at only one Gayo has its benefits when it comes to stamina.

This is the kind of thing that these Gayos are made for. I love an unexpected mash-up, and I’ve been waiting for Lovelyz to break out of their cutesy concept. I’m not sure this was quite that, but pairing them with No Brain was an inspired idea that resulted in a very fun performance. Everything sounds more dramatic with the injection of electric guitar, and the otherwise buoyant Twinkle sounded especially awesome here.