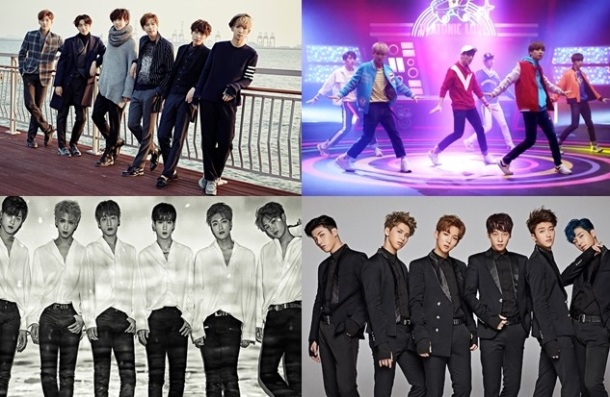 The day has finally come. Snuper have released enough singles to warrant a top ten list!

It’s disappointing that the song to put them over the top is the supremely underwhelming Tulips, but I’m happy to say that the top four entries on this countdown are near-perfect, A+ examples of k-pop. If you haven’t checked out Snuper yet, consider this an initiation filled with some of the best material the industry has had to offer over the past few years.

As their first original Japanese single, Oh Yeah’s frenetic chorus could have done with some of their Korean material’s refinement. It’s unabashedly energetic, but definitely catered to a specific type of j-pop taste. (full review)

Abandoning producers Sweetune for the first time in their Korean singles run, the downbeat Tulips sparks a bit of funk from its chorus but feels miles away from their best work. (full review)

Building toward an anthemic, rock-infused chorus, Stand By Me is the weightier, more musically developed offering of their two j-pop singles. (full review)

The synth-kissed Shall We Dance is both Snuper’s debut and their first collaboration with Sweetune. As such, the song’s exuberant chorus only hints at the excellence that would follow.

You=Heaven presents one of the group’s most interesting song structures, transforming from soft rock balladry to full on disco-pop. It’s anchored by a juggernaut of a chorus, driven by a series of bubblegum hooks. (full review)

Snuper’s big, aggressive dance-pop moment. It’s Raining surges with sonic drama, from its emotive verses to the titular, disco-tinged refrain that opens the track. Stuffed to the brim with drum-fills, blasts of brass and touches of guitar, this is k-pop at its streamlined best. (full review)

Kicking off with an instantly recognizable a-ha-esque synth riff, Platonic Love stands as Snuper’s most iconic track for good reason. With its unflinching embrace of everything that made 80’s music so amazing, the guys instantly earned their reputation as retro kings. That lush, layered chorus is pure Sweetune magic. (full review)

Dabbling in 2017’s tropical trend, Back:Hug pushes its overused elements in surprising direction, resulting in a track that transcends genres. Its moody, complex verses are a total treat, but the propulsive pre-chorus and soaring hook make this one for the ages. (full review)

The Star Of Stars is as perfect a song as modern k-pop can give us, supplying a constant sense of build without any dull or useless moments. Taking Back:Hug’s tropical experimentation and upping the tempo, Star operates as a fizzy head rush of sharply calibrated pop hooks. It was the best song of 2017, borrowing from the year’s trends but painting them on a canvas of pure pop bliss. (full review)

8 thoughts on “The Top Ten Best Songs by SNUPER”