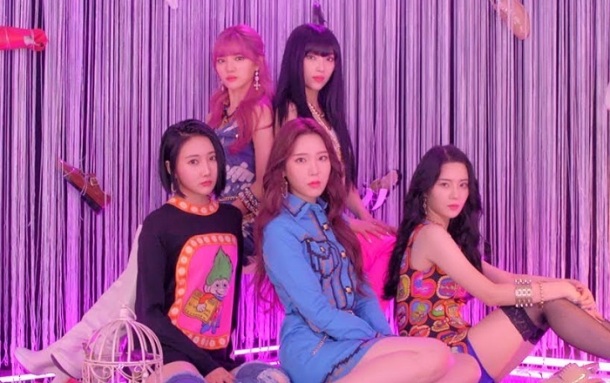 Purple Beck’s June debut Crystal Ball was promising but unpolished, slotting them comfortably alongside K-pop’s quirkier girl groups. But, more important than a debut is its follow-up, especially when it comes to acts from smaller agencies. Financial constraints are very real in these cases, and if an agency splurges on an underwhelming debut, subsequent material may suffer.

Judging from Dream Line’s music video, which ham-fistedly incorporates none other than JYJ’s Kim Jaejoong, the girls still have enough cachet to make some waves. Unfortunately, the song itself is nowhere near as memorable as Crystal Ball. This time around, that track’s oddball touches have been dulled in favor of a more straightforward girl group approach. The synth-heavy production is pleasing in a LOONA-lite kind of way, though it doesn’t bring anything new to the table. I like the hard-hitting electronics during the chorus, but wish the producers would have removed the chanted, cheerleader-esque backing vocals entirely. They’re an odd contrast with the instrumental’s more refined moments.

If given a memorable melody, Dream Line would improve by leaps and bounds. Nothing about the song construction is particularly egregious, but the entire track floats by without ever delivering a knockout hook. The militant post-chorus comes close, but ultimately fizzles. Repeated plays may tease out some of Dream Line’s hidden charms, but listeners shouldn’t have to work that hard to enjoy this kind of dance pop song — especially one from a rookie group in search of a growing fan base.