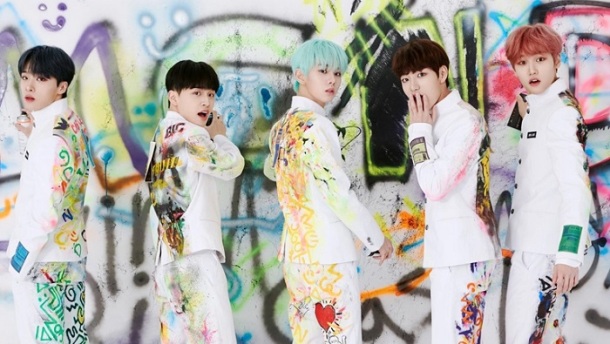 Debuts from major agencies are always exciting, but we really haven’t seen any yet this year. TOP Media isn’t one of K-pop’s biggest agencies, but their roster (Teen Top, 100%, UP10TION) are certainly known to most idol fans. With Ice Age, rookies MCND officially join that line-up. This comes after pre-release TOP Gang, which I found to be overly noisy and hookless. Back in January, I had hoped that their full debut might explore different musical territory. However, Ice Age is a similarly rap-heavy beast.

A track like this will never be completely within my wheelhouse, but I can appreciate its innate goofiness. Unlike TOP Gang, which offered swagger over substance, Ice Age introduces a bit of fun. It’s still noisy and seemingly allergic to melody, but I can’t help but smirk when the guys shout “ice hail!” with an earnest commitment to their staged sense of badassery. It’s just so stupid, and I like this kind of stupid.

Unfortunately, as a actual song Ice Age leaves me wanting more. Apart from its catchy, rambunctious hook, there’s not a lot to sink your teeth into. The instrumental pounds with the kind of trap-meets-EDM fury that underlines nearly every track these days. It clobbers you over the head from the very first moment, not unlike the more polarizing work of a group like NCT. With the majority of its verses (and chorus) devoted to hard-hitting rap, the scraps of melody left behind are relegated to the pre-chorus. Sadly, this segment lacks a sense of identity. It’s well-performed, but could have been ripped from any other song of this genre. That’s problematic when considering a rookie group who need to quickly establish their own lane. More than anything, MCND’s chosen sound seems to involve a lot of shouting. I’m not sure I’m sold on that.