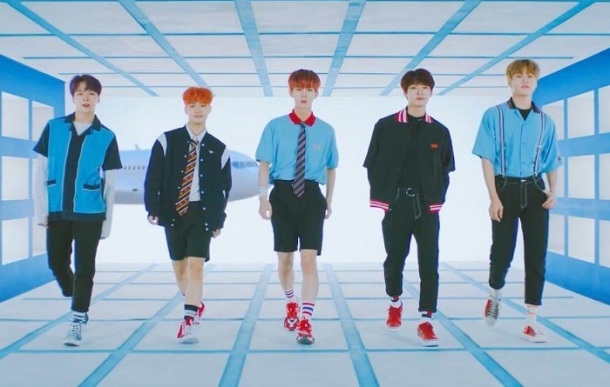 Despite my initial hesitance, MCND’s Ice Age has slowly become one of my favorite boy group tracks of 2020. Of course, it hasn’t exactly had much competition in that realm, but its goofy charm has been a welcome salve in this era of trap-fueled angst. However, the rest of the group’s debut album was too generic and forgettable for its own good, and follow-up single Spring (떠) more or less succumbs to those same problems.

Spring is perched halfway between Stray Kids and Seventeen, borrowing the quirky hip-hop bounce of the former and jagged vocal layering of the latter. Within this trendy brew, there isn’t much room for MCND themselves. As silly as it was, Ice Age’s boisterous refrain had the potential to be somewhat iconic for the group. Spring spotlights their skills, but feels interchangeable with so many similar efforts.

It will surprise none of you to hear that I’m not a fan of Spring’s heavy trap influence. I find its instrumental to be pretty unpleasant, lacking the kind of warmth or funk that characterizes my favorite mid-tempo hip-hop tracks. The rapping is also overly aggressive, bordering on headache-inducing during parts of the verses. Spring’s more melodic moments are its saving grace, even if the song never finds a killer hook. From what I’ve heard so far, MCND’s vocalists are underrated. They’re given scraps of melody within songs that hinge too heavily on hip-hop. I would have loved to hear the tone of Spring’s chorus spread more generously throughout the rest of the track. As it stands, this feels pretty throwaway.