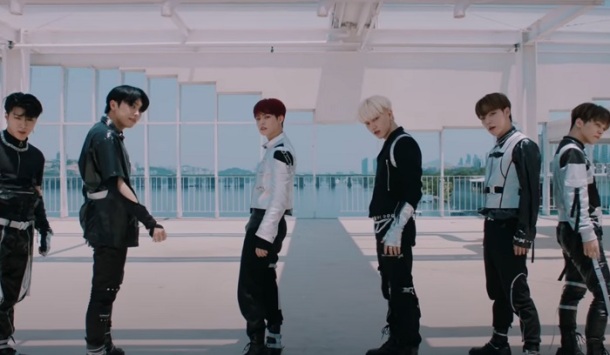 What to do with ONF’s New World (신세계)? I’m all about classification, and this song doesn’t really fit within K-pop’s usual categories. I wouldn’t normally review a song that’s been given a performance video rather than an actual music video. Yet, I don’t think you can really call New World a b-side either, since it’s not promoted alongside anything else and is labeled as a comeback (within the context of variety series Road to Kingdom, at least). But, the track is too awesome to relegate to Kingdom recaps.

Remember a couple of years ago, when the massive success of biopic Bohemian Rhapsody caused a sudden surge of interest in Queen’s music? K-pop idols were performing covers upon covers, yet none of that grandiose influence filtered down to their actual music. I say this because New World has serious Bohemian Rhapsody energy. It’s not as structurally complex (or as long), but it manages to pack a cavalcade of moments within its four minutes.

Produced by the amazing Hwang Hyun, New World takes all of ONF’s previous singles and throws them in a blender, adding a generous dose of theatricality on top. After a brief atmospheric introduction, the track plunges into a cascade of synths and thumping percussion. This verse moves at breakneck speed, punctuated by a filtered choir of voices. The pacing slows a bit for New World’s grandiose pre-chorus, but the energy continues to generate.

Like We Must Love and Why, New World’s chorus pulls the tempo back to half time, and I was not pleased with this on my first listen. I’ve since been won over, and that’s mostly thanks to the gorgeous vocal layering and sense of musical catharsis that powers the melody.

After another standout verse and chorus, World briefly dips into a soft, symphonic interlude that sets things up brilliantly for the its knockout of a climax. In addition to some truly Queen-esque guitars, this grand finale allows the guys to deliver goosebump-inducing power notes. Few songs have built to such a satisfying endpoint this year, and that sense of storytelling makes New World incredibly compelling. I’d put it in the same family as TVXQ’s classic Rising Sun. It’s not as good (I mean, what is?), but its sheer ambition is electrifying.

**Now, here’s the real question? Do I count this as a title track for my monthly round-up and year-end countdown? What do you think, readers?