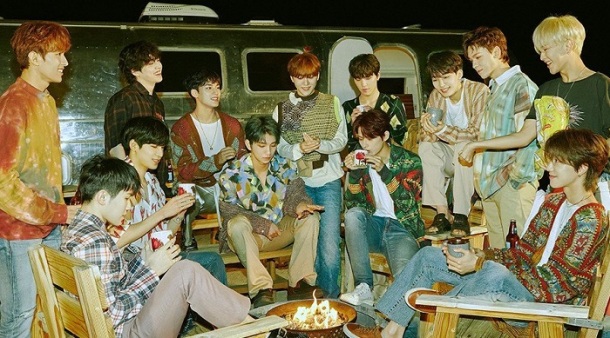 I’ve been longing for the return of “funky Seventeen” for way too long now. Their first three years remain unbeatable, offering a steady supply of rollicking, upbeat tracks. These can still be found from time to time within their albums, but the group’s title tracks have steered toward angstier and edgier material for some time now. Left & Right marks a semi-return to the bright music of their past, though I guess I should be careful what I wish for. The song has its moments, but is undercut by an irritating hook that feels more like a TikTok challenge than a chorus.

Left & Right is also Seventeen’s first title track after Pledis Entertainment was acquired by Big Hit Labels. This is undoubtedly a big moment in their career, and I wish it was soundtracked by a song that matched the significance. I’ve always disliked music that feels as if it’s trying too hard to be clever or meme-worthy, and Left & Right strikes me as hinging too strongly on novelty. Seventeen are above novelty, and certainly above a chorus as uninspired and repetitive as this.

The track’s opening verse rekindles a bit of that old Seventeen magic, melding playful rap with splashy vocal ad-libs. The pre-chorus is even more enjoyable, as it appears to be building toward an exciting centerpiece. Instead, Left & Right collapses into its obnoxious, one-note hook and never really recovers from there. The second verse is stuffed with equally annoying hip-hop, and any goodwill the brassy instrumental might cultivate is undercut by tinny, trap-inspired percussion. Honestly, it feels like Left & Right spends all of its energy telling me to have a good time, rather than actually being a good time.