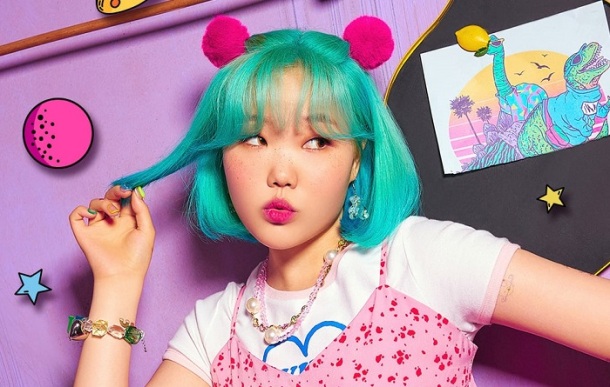 It’s been over a year since AKMU’s last comeback, and that song is still sitting comfortably on the Korea charts. No matter what they do, this brother-sister pair is popular. So, it makes sense to branch out to solo careers. And though Lee Suhyun’s Alien is composed by her brother Chanhyuk, its dancefloor-ready sound is a departure from AKMU’s more folksy style. In fact, the song feels very much like “K-pop does Dua Lipa,” which is no bad thing.

But, that comparison does Lee Suhyun a disservice. She’s an incredibly unique vocalist, and the clarity of her tone gives Alien its own vibe. She’s proven time and again that she can tackle any genre and make it exciting, so it’s no surprise that she excels here. She gives Alien a quirky style, transforming a rather standard disco throwback into something more exciting.

The song’s instrumental throbs with consistent bass. Much of its appeal hinges on various rhythm guitar loops and riffs, which gives the track a refreshingly old school appeal. There are modern touches here and there, but the production is pretty simple and single-minded. This allows for focus on Suhyun’s performance, which really drives the track. The verses are especially pleasant, with a melody that peaks in a few well-place high notes before delivering a groovier refrain. In contrast, I wish there was more to the chorus. Its simple melodic asides work well enough, but a megawatt hook (à la Everglow’s La Di Da) could have sent this into the stratosphere. Even so, Alien is an ebullient burst of dance pop with major potential to grow as time goes on.