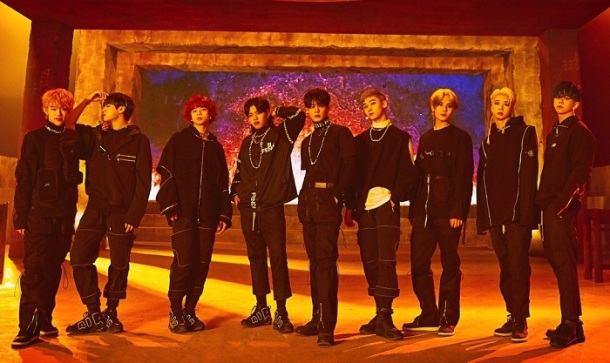 Before we get into Asurabalbalta (아수라발발타) itself, can we all just agree on T1419 being a horrible name for a K-pop group? I mean, I know the market is oversaturated, but there are plenty of words that are still available. T1419 feels like it was cobbled together by the periodic table. But then again, this new group hails from the same agency as Momoland, so I guess expected a decent moniker was probably asking for too much. The guys previously teased us with last year’s Dracula, which made little impact. Asurabalbalta is even noisier.

I have a soft spot for rookie groups, and always want to give them the benefit of the doubt. It’s often the case that a great act spawns from a lousy debut track, and I hope that will be T1419’s fate. But if Asurabalbalta is any indication, they’ve got a ways to go. Similar to Victon’s comeback today, Asurabalbalta is all bluster. The guys shout and swagger over a lurching thunderclap of an instrumental, anchored by a burbling beat drop, police sirens and clunky stomps of percussion. It’s a sputtering mess, and leaves little impact despite its desire to clobber you over the head at every turn.

The thing is, when you’re this loud all the time, that constant volume loses all its impact. A more dynamic song would have built to its most exciting peaks with a sense of intention, drawing contrast to make best use of its aural firepower. Asurabalbalta feels clumsy in its execution, bumbling down the street yelling at every listener it passes. There’s no real hook to be found beyond an aggrieved repetition of its title, and I’m left with no sense of what makes this group special or interesting.