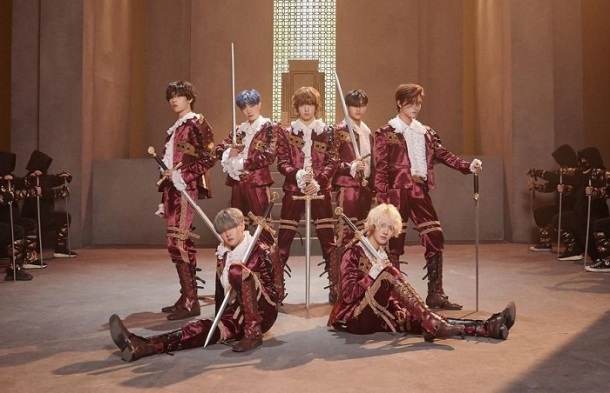 Debut group Kingdom started teasing their fantasy concept weeks ago, and my attention was instantly piqued. I love a dramatic, theatrical concept that goes beyond the typical “bad boy” posturing favored by many groups. I think this is especially important for a debut group, who need to establish their niche right away. Kingdom promise a multi-album story arc of magical, medieval intrigue, and they’ve got the cosplay outfits to back it up. But, do they have the music?

Excalibur isn’t perfect, but I love its ambition. The song bases itself upon many of todays trendy flourishes, yet melds them to a bombastic brew of orchestration. The verses wisely opt for a resounding stomp, and though this switches up a bit during the tricky second verse, it’s never at the expense of Excalibur’s cinematic atmosphere.

The real fun begins during the song’s pre-chorus. It builds in an expected manner, but brings in church organ to create an overpowering rush of sound. After an impressive flourish of vocals, this theatricality continues into the chorus. While I’ll never be a fan of future bass’s lurching nature, it’s used pretty well here. The slabs of aggressive synth blend with a hearty performance that layers Kingdom’s voices to build a resonant texture. In keeping with the song’s concept, Kingdom come across as a veritable idol army. A wobbly dance break makes for a fun (if jarring) bridge, and clears the air before Excalibur’s hulking chorus makes one final return. It all gets a little noodly at times, but if their agency can laser-focus on the strengths of this sound, we could have something very special on our hands.