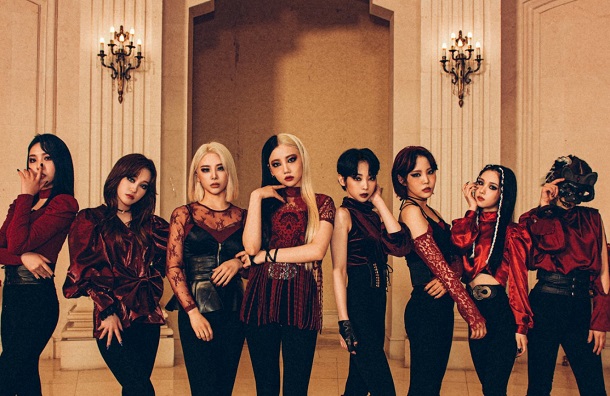 Apart from their ‘girl in a mask’ gimmick, not much about Pink Fantasy’s discography has remained consistent. Their music swings pretty wildly between sounds, though a creepy sense of unease ties everything together. Still, I think the group hit the sweet spot with 2019’s rock-fueled Fantasy. It’s a shame that follow-up singles jettisoned this style completely, but Poison (독) revisits the genre in a big way.

Immediately, most listeners will compare Poison to Dreamcatcher’s music. The similarity is hard to ignore, though parts of this song actually go harder than most of Dreamcatcher’s singles. Pink Fantasy fully embrace the track’s heavy guitar riffs and barreling percussion. Haunting keys tie the instrumental together, adding a crystalline texture to the otherwise overbearing arrangement. But, Poison kicks up a brisk pace throughout, harnessing an energy more in keeping with K-pop’s dance-heavy expectations.

While heavy metal isn’t really my thing (especially that death scream that comes after Poison‘s first chorus), I’m surprised how much I enjoy this. The verses get the job done, and I appreciate the lower tone of the vocals. But, Poison really comes alive during its chorus. It’s sung in unison, giving the refrain a force that matches the aggressive instrumentation. Judging from their past few singles, Pink Fantasy sound more assured than expected, and the melody itself packs a punch. It all builds to a volley of dramatic power notes, lending a shot of intensity just where the song needs it. This may just beat Fantasy as the group’s best title track yet.