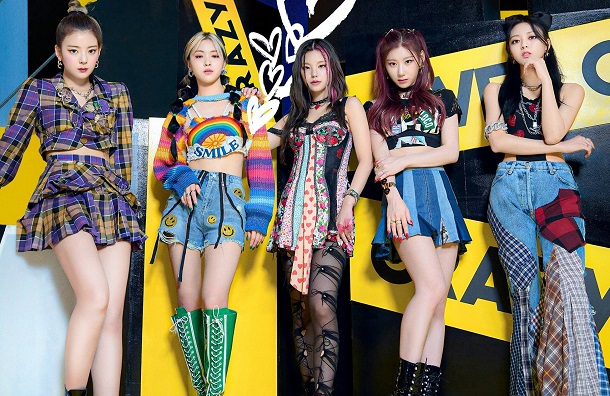 ITZY burst into K-pop two and a half years ago with a song and sound that made them one of 2019’s most interesting groups. Since then, so many of their peers have ITZYfied their own music – shoveling teen crush attitude over busy instrumentals stuffed with restless, chintzy percussion. ITZY should be immensely proud of their status as trendsetters, but it puts them in an awkward spot. By continuing to stick with the style they popularized, they risk falling behind the trend. It’s ironic. A rock and a hard place, really.

Last spring’s Mafia in the Morning attempted to pull free of this quandary by steering the girls’ music in a more hip-hop focused direction. But, the song itself was weak and one dimensional. So, I’m not surprised that Loco reverts to their pre-2021 style. They’ve even paired with Galactika, the production team behind career highlights Dalla Dalla and Wannabe. Loco’s frenetic energy recalls those hits, but the overall package isn’t as sharp.

Loco works in fits and starts, but I wish the song felt more streamlined. Like so many K-pop title tracks of this new generation, Loco’s various segments might as well have been pulled from a box of disparate pieces and cobbled together by way of proven formula. There’s nothing here we haven’t heard countless times in better songs, and that keeps Loco from feeling like a necessary addition to the already-overstuffed teen crush sub-genre.

On the plus side, I’m delighted that Loco opts for a sung chorus rather than a chant-along beat drop. The melody is no Dalla Dalla, but the bold refrain casts a few sparks. Even better is the electric guitar running underneath this hook. In fact, my favorite moment in the music video occurs when the vocals drop out and the arrangement lets that distorted guitar rip. Of course, this extended interlude isn’t included in the actual song recording. It’s as if JYP Entertainment is scared to rock the boat and deviate from this narrow idea of what a girl group hype track can be.

In the end, ITZY do what they do best and lace Loco with their own brand of effervescent charisma. They sell the song, and that’s enough. But, we need a popular group to hit K-pop with new and diverse ideas. At this point, tracks like Loco can’t help but feel like diminished returns. It’s a tasty leftover, but I’m ready to see what else is on the menu.