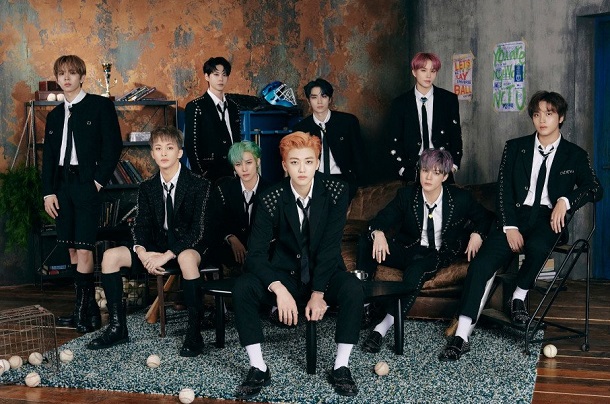 With barely a moment to take a breath since their release as NCT 127, the NCT guys are back for their latest full-group project. NCT 2021 promises another round of mix-and-match sub-units, though the teasers so far suggest no real change in sound or style. Title track Universe (Let’s Play Ball) brings together Doyoung, Jungwoo, Mark, Xiao Jun, Jeno, Haechan, Jaemin, Yang Yang and Shotaro – a vocal-heavy group that had me wondering if the song would deliver something a little different.

As usual, the lure of a successful formula has proven too tempting to resist. Universe is exactly what you’d expect of NCT (and SM in general), composed by a team of usual suspects including long-time SM talent Kenzie. It’s a solid distillation of their sound — if you can get past the first thirty seconds. Universe opens with an obnoxious shout, quickly joined by clattering percussion. I’d remove this introduction entirely. In fact, let’s get rid of the silly “Let’s play ball” hook and call it a day. It clashes with the rest of the song in a juvenile way.

Ignoring this jarring hook, Universe thrives on its obvious SM-isms. It’s so nice to hear the return of that halting, layered vocal arrangement during the pre-chorus, hearkening back to the agency’s iconic second-gen sound. The sung chorus is also satisfying, even if the melody could be a bit stronger. It’s supported by an instrumental that merges the old with the new. I love the 90’s synth flourishes, and the way the rhythm switches as we move from verse to pre-chorus. The song is quite groovy in its off-kilter way, and benefits from consistent shots of vocal firepower. With this in mind, I’m more than happy to play ball with Universe. Just ease up on the shouting, guys.