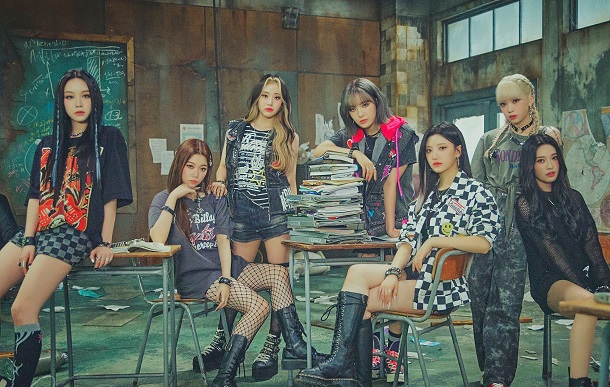 Rather than develop a signature sound, Billlie seem to have developed a signature mantra: “keep things quirky and unpredictable.” From their verbose song titles to their genre-hopping sound, they’re proving to be one of the most interesting girl groups of this era. With such a wide variety of influences, listeners may not connect with every song. I wasn’t a fan of February’s GingaMingaYo, for example. But, new track Ring Ma Bell has won me back.

K-pop’s “rock” trend has been slowly building for years now, ushered in by pioneers like Dreamcatcher. Billlie have taken the baton in a big way, building Ring Ma Bell around a blustery stadium rock sound. To be honest, I think I’m more excited by the energy than the song itself, but it’s nice to hear idol groups trying on different styles and fully committing to the concepts.

Ring Ma Bell delivers a snotty teen rock attitude, though it’s definitely sanitized for a K-pop audience. Built around its titular refrain, the song pounces right out of the gate and never loses focus. It’s bolstered by omnipresent guitar and stomping percussion, both of which give Ring Ma Bell a larger-than-life energy. The guitar really gets going during the climax, unleashing a fiery solo as the girls shout the final chorus. Comparatively, the melodic hooks feel a little throwaway. The song is catchy from first listen, but a dynamic switch-up (maybe a stronger bridge?) might have broken the repetition. Still, Ring Ma Bell is a welcome surprise, showcasing Billlie’s versatility and power. Its music show performances are bound to be a ton of fun.