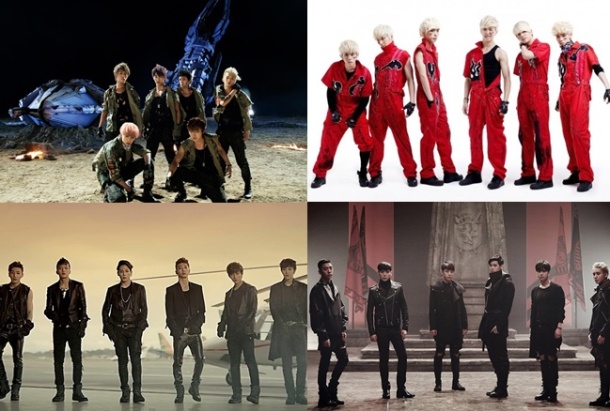 To tell the truth, B.A.P was a group I got into late in the game. Something about their image turned me off initially, but then I came to my senses and realized that their music is actually pretty awesome. They’ve been through a bit of turmoil over the past couple of years, but now that they’re back in the spotlight, it’s a perfect opportunity to look back at their best songs.

Abandoning the darkness found in much of their 2013 material, the guys returned with a pop track showcasing bluesy guitar and a soaring melodic refrain.

Returning after a lengthy hiatus, B.A.P came back swinging. Young, Wild & Free takes the hallmarks of their previous material and grafts them onto a sky-high anthemic chorus.

The only midtempo song on my list, this pre-release showcased a smoother, more mature sound for the group. It may not initially stand out, but that melancholic melody sticks.

Released just as this list was compiled, it’s hard to fully judge where this track will settle. For now, its propulsive beat and orchestral vibe guarantee it a solid spot. (Full review here)

B.A.P’s bid for We Will Rock You style stadium anthem, and it works. To see this performed live is to fully appreciate its shout-along power.

The first time the guys showed us a lighter, more pop-influenced image. Stop It‘s bubblegum melody and bouncy production likely split opinion among fans, but it remains one of their most hummable songs.

B.A.P has been somewhat pigeonholed into a particular sound, which causes excellent pop tracks like this to go underrated. Feel So Good is my favorite single from them in years, and the funkiest title track they’ve recorded. (Full review here)

The guys burst out of the gate with the combative energy of Warrior, their debut single. It’s a total statement of intent, from the stadium whistles to the thundering, militant hook.

When I think of B.A.P at their full potential, One Shot comes directly to mind. It’s a song that knows how to use the band’s best and most characteristic affectations. The rap is on point — menacing and charismatic. And the chorus, with its operatic backing and immense flair for the dramatic, gives the track the aura of a blockbuster. The compelling, dark music video only adds to its bombastic, take-no-prisoners nature.