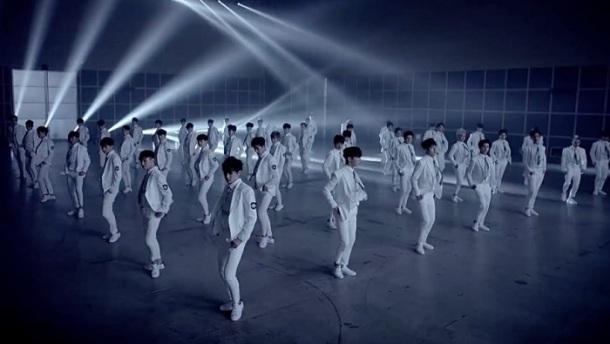 Time Leap, along with the other original songs from BOYS24‘s final episode, have been available for a few weeks now, but I’ve been following along with the show’s english subbed versions, which have taken much longer to come out. As a series, I found BOYS24 to be completely enjoyable, even if it ended up copying Produce 101‘s format almost entirely. I’m satisfied with the final line-up, though I’m curious how and what they’ll be promoting over the next year.

As we entered the final episode, my favorite competing unit was Unit White, and that was due mostly to Inho, who had impressed me since episode one with his ambition, talent and charisma. Because of this, I was overjoyed when the groups paired with producers for original songs, and Unit White ended up choosing to work with Sweetune. Longtime readers here will know how much I adore Sweetune’s work, and the propulsive Time Leap has their 80’s DNA etched into every bit of it. This is not a subtle pop song. Instead, it clobbers you over the head with its cheesy, go-for-broke chorus that will instantly lodge itself in your memory. I love how the track also incorporates rock elements, especially that dramatic flourish of guitars that intros the first verse. It could be slotted between any of Sweetune’s 2010-12 tracks for Kara, Infinite and Boyfriend and wouldn’t sound out of place at all.