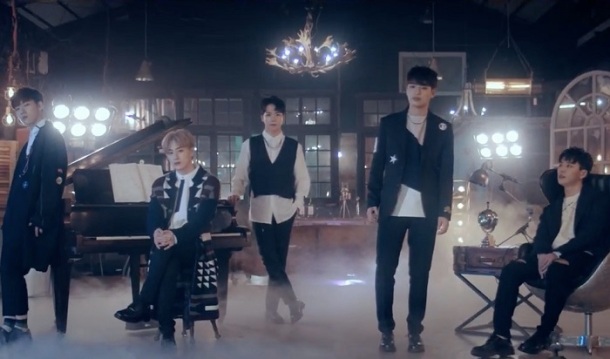 There are many underrated k-pop groups, but few can boast a discography as consistently solid as 100%’s. Their sound has shifted throughout the years, and new single Sketch U (어디 있니) follows up on their Sweetune-produced reinvention last October. Though I’m a bit blinded by my love for Sweetune’s music, I’m thrilled that they’ve continued to work together. It’s a perfect match between 100%’s unique vocal color and Sweetune’s trademark, synth-drenched work.

Sketch U marries a traditional Korean ballad sentiment with a retro, orchestral-rock backdrop. The instrumental is reminiscent of Sweetune’s work with Infinite‘s Sungkyu, providing a polished blend of big drum beats, soaring guitar loops and stately synths. It’s the song’s most effective element, giving it an immense, anthemic quality that stands out among the many OST ballads that rely on a more melancholic mix of piano and strings. Though there isn’t much variety in the track’s dynamics, it crests forward with a sense of theatricality that serves it well.

Not every group could compete with such a grand instrumental. Luckily, 100% are no shrinking violets when it comes to vocals. Much of Sketch U‘s soaring chorus is delivered in falsetto, climaxing in an extended peak that could have come off as shrill. Luckily, the arrangement smooths out any problematic moments with an effective use of layering, echo and harmonization. The post-chorus transition to rap verses also works surprisingly well, especially given the song’s soft-rock leanings. Taken together, it’s a rousing package that continues the group’s near-flawless singles run.