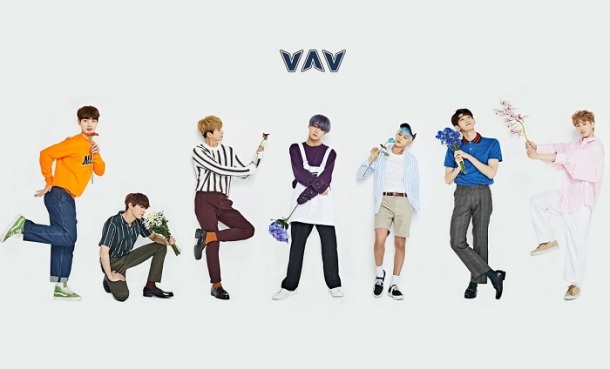 Boy group VAV have been around for six singles now, but they’ve yet to release a song that has had the impact necessary to shoot them to stardom. February’s 80’s-influenced Dance With Me was a step in the right direction, and they’ve definitely chosen the right collaborator in producer/composer Ryan S. Jhun, but it feels like he’s giving them leftovers from other artists. Flower (You) still lacks that punch that the group has been missing.

Truthfully, I’m always a little hesitant when k-pop acts attempt a reggae-influenced comeback. Reggae itself is all about riding a groove, which often takes precedence over complicated arrangements or production flourishes. To prevent a track like this from getting boring and repetitive, a performer needs grit or character in their delivery. I’m not convinced that the polished sound of a k-pop boy group is well-suited to this demand. VAV sound like pros on Flower, but the vocals aren’t digging in and getting messy with the track. The heavily repeated “you hoo hoo” hook is undeniably catchy, even as it feels too processed for such a light instrumental.

K-pop is so adept at mashing up styles, and I wish that would have happened here. If anything, Flower is too straightforward. It has an easy melody well-suited to summer, but everything feels so restrained. By the time the electric guitar comes in during the song’s final moments, it’s a welcome jolt of diversity that could have (and should have) lasted longer. More importantly, after six comebacks I still have no idea what this group wants to be. If their music was more memorable, that wouldn’t be such a problem.

One thought on “Song Review: VAV – Flower (You)”