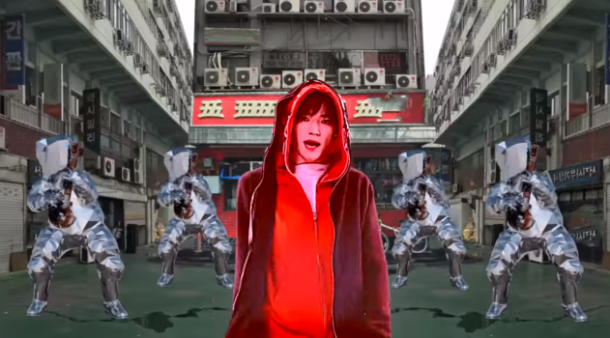 Hitchhiker has long been one of my favorite SM Entertainment producers, collaborating with acts like Shinee and Super Junior to brilliant effect. His experimental solo work is a little harder to enjoy on a pure pop level, relying heavier on trippy, repetitive riffs and percussive loops than any sense of melody. Last year’s $10 felt more like a bad dream than an actual song, even if its ambitiously oddball soundscape gave listeners plenty to chew on.

With Around, Hitchhiker has taken this sound and made it more palatable with the addition of one of SM’s biggest up-and-coming stars. Taeyong is a notable member of boy group NCT, leading sub-unit NCT 127 and bringing a grittier performance style than most of the agency’s idols. He was a smart choice to tackle Around‘s busy beat. With all the noisy production flourishes eating up the track’s short running time, it takes an enormous dose of charisma to compete. Taeyong may not have all that much to do here, but his practiced snarl cuts through.

He delivers the song’s chorus in a lackadaisical — almost lethargic — tone, contrasting with the constant explosions of electronics that swirl around him. As hooks go, I would have preferred something more combative. Since the song is so short, there’s only one segment that might be considered a verse. But this moment (right before the final hook), is Around at its most exhilarating. Every instrumental loop and sample is thrown together as Taeyong’s flow speeds and intensifies. It’s the messiest moment in a pretty messy song, but the chaos is actually pretty exciting — especially given SM’s reliance on cookie-cutter ballads these past few months.