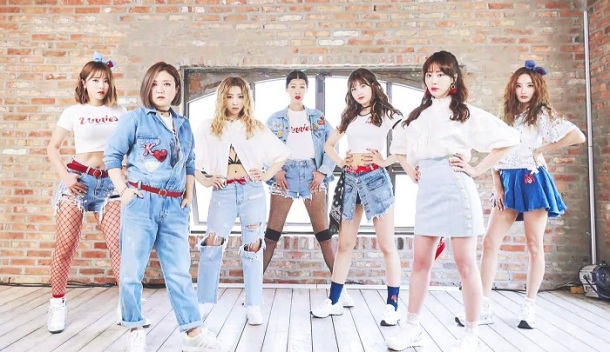 It’s been a rough couple of weeks for k-pop, with releases dwindling to a trickle in light of presidential elections and holidays and a general springtime slump. With such a scarcity of quality music, I’ve been especially thankful for Korean variety shows. And this year, no series has been more consistently fun than the second season of Sister’s Slam Dunk. As with the first series, the show culminates in a digital single recorded by the hodgepodge girl group Unnies. This year’s cast is universally fantastic, and they’ve been given a real blast of energy with the buoyant Right? (맞지).

Among the seven members of 2017’s Unnies, only Minzy, Somi and Hong Jinyoung are professional singers, which means the vocals on Right are heavily processed. You can easily hear the producers covering up faults with a heavy use of echo and layering, but the song still feels like a credible effort. More importantly, there’s a potent sense of excitement surrounding the entire track. It’s been awhile since we’ve heard k-pop this jubilant, bouncing from one sunny hook to another. Last year’s Shut Up felt trendier and calculated, but Right has a classic pop sensibility. There’s no posturing here — just a dynamite melody.

But more than the song itself, Right succeeds on the strength of the stories behind it. Watching Sister’s Slam Dunk improves the listening experience tenfold, as each verse and chorus has been dissected, restructured and dramatized for TV. Jinyoung’s much-spotlighted rap verse is more than credible within the world of idol rappers. Yewon’s vocals sound strong and confident despite the struggle it took to bring them out. Chaeyoung’s addictive smile is all over her climactic end-of-chorus hook. Even Jinkyung and Sook fit right in, though the series had constant fun casting them as oddballs within the girl group world. As a full package, it can’t be beat. As a song on its own, it’s still a ton of fun.