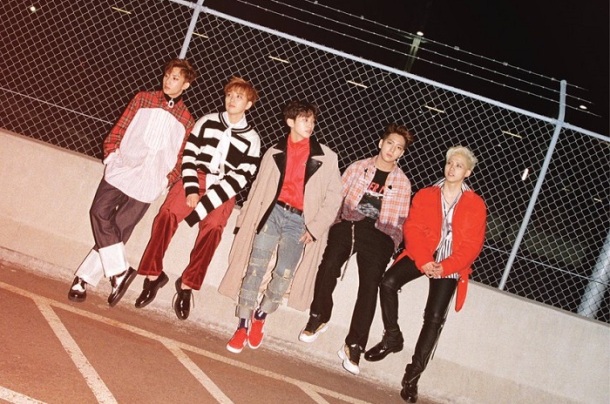 There are few “sure things” in k-pop. but the beauty of a self-produced group is that you can be assured of some sense of musical consistency. B1A4 has been that group for the better part of their career, driven primarily by the songwriting prowess of members Jinyoung and CNU. Leader Jinyoung has been in charge of every title tracks for the past five years, and Rollin’ continues this successful pattern by delivering yet another instant surge of dynamic pop prowess.

One thing Jinyoung knows especially well is the power of lush song arrangement to create moments of aural euphoria. His best work has a way of rushing over you, enveloping listeners in sweeping soundscapes that blend catchy pop hooks with a shot of pure emotion. The final moments of Rollin’ are among this year’s most stirring climaxes. I was worried when it was announced that B1A4 would become the umpteenth k-pop group to tackle the tired tropical house trend this year, but as with 2017’s strongest examples of the genre, Rollin’ blends its overdone elements with classic production finesse. In this case, Rollin’s tropical frame is given an anthemic rock makeover, augmented with heavy percussion and stadium-sized vocal layering.

For its first twenty seconds, Rollin’ is that same song we’ve heard over and over, fueled by familiar chirps and electronic percolation. But as soon as Jinyoung’s dramatic pre-chorus hits, Rollin’ elevates into a grand, sprawling slab of pop music that feels more immense than anything we’ve experienced all month. Though it substitutes an instrumental breakdown for the type of fleshed-out chorus expected from B1A4, this is the rare case of that structure working. Rather than pare down the track’s sound, this swirling hook increases the sugar-rush intensity that makes Rollin’ such a treat. By the time we hit the guitar-fueled bridge and round our way into the explosive finale, any concerns about the song’s simplicity are washed away by the pure thrill of its energy.