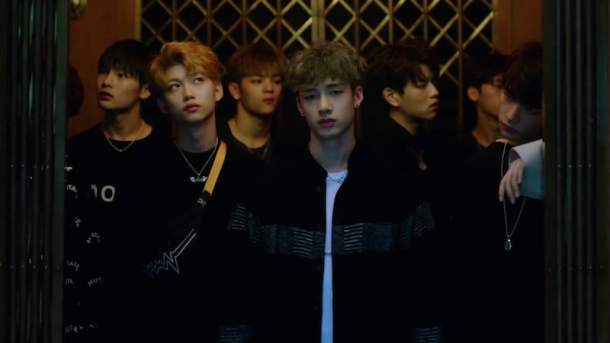 October will soon be cluttered with idol survival/debut series, from The Unit to YG’s Mix Nine, to JYP’s Stray Kids. Of the three, Stray Kids seems set to be pitched as more of a “road to debut” documentary than a build-a-group competition, so pre-release Hellevator presumably acts as a teaser of what the actual group might sound like. And while there is certainly potential on display, the song’s been-there, done-that structure leaves much to be desired.

Hellevator has the brooding atmosphere down, casting the group in an oddly moody light. It’s one thing to be hard-hitting and aggressive in production and performance, but it’s hard to get excited about a rookie that just sounds so downbeat. Structurally, the track strings together several tropes, from the cathartic rap style to the pensive vocal pre-chorus, to the “drop” that makes up the actual hook. Maybe I’m just too old-school, but I cringe at the idea that the concept of “chorus” has become replaced with “drop” in the k-pop lexicon. To be clear, the whiny electronic riff that makes up Hellevator‘s centerpiece is not remotely close to an actual chorus, and as an EDM drop it’s just too wimpy to carry any sort of weight. This overused structure has been successful a few times in 2017 (exhibits A, B), but on the whole I am ready to be done with it. For a pre-debut group to already be saddling themselves with this derivative technique is quite disappointing.

As dark and dramatic as it is, Hellevator isn’t all doom and gloom. The rap segments hit hard, even if all the bluster is a bit difficult to take seriously. And the taste of melody that exists paints an evocative atmosphere that works especially well during the song’s opening moments. It’s just a shame that the guys aren’t attempting anything we haven’t heard a million times before. Being from JYP Entertainment, they’re almost guaranteed a certain level of success. They’d be wise to take that platform and push the genre forward, rather than keep it stuck in neutral.