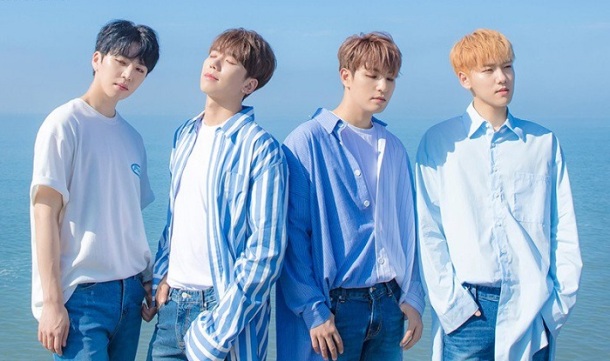 Though they released a great Japanese single last month, Grand Bleu is the first Korean work by boy group 100% since the passing of their leader Minwoo. We’ve been promised more music later in August, but for now Bleu acts as a pre-release to tide fans over. It’s heartening to hear the group back at it, emerging from tragedy to carry on their musical legacy, but this is the kind of uneventful song that would have been better off as an album track.

100% are the latest in a string of groups to abandon producers Sweetune, who steered their last two albums to great musical (if not commercial) success. Instead, Grand Bleu was co-written by Moon Kim of indie pop group Royal Pirates. It’s an interesting collaboration, but once you’ve heard 100%’s extraordinary vocals matched with Sweetune’s gift for layered arrangements, it’s difficult to go back to something more generic.

And boy, is Grand Bleu generic. The song struggles to define an identity beyond “mildly tropical” as it grooves through its summery, mid-tempo beat. The opening verse is a low-energy affair, sputtering to a start with more focus given to its atmosphere than creating an engaging melody. The chorus kicks things into gear, offering a greater chance to display those aforementioned vocals. But its refrain still feels muddled, failing to deliver a memorable hook. When it comes to pre-releases, Grand Bleu certainly could have been worse, but in comparison to 100%’s otherwise spectacular discography, it comes across as inessential.