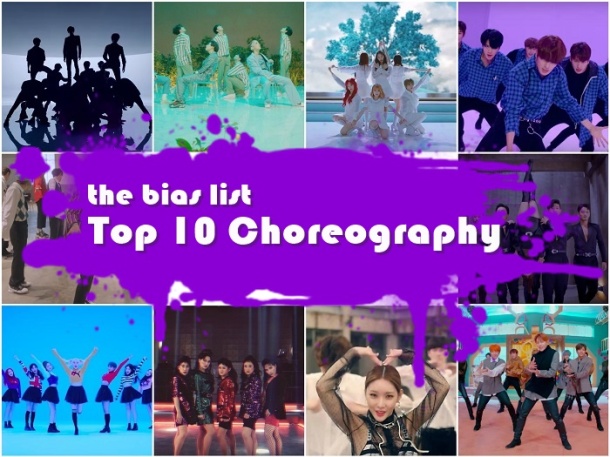 I may not be a trained dancer, but I do watch music shows each week! In 2018, intricate and catchy choreography continued to play a huge part in K-pop comebacks. Here are the ten routines that caught my eye this year:

With some of the most satisfying formations of the year, Puzzle Moon‘s smooth routine precisely emulated all sorts of lunar imagery, relying on little more than curved wrists and extended arms to create magic.

One of the year’s most iconic and covered dances, Bboom Bboom capitalized on Momoland’s addictive, upbeat energy. It’s a smart balance between trendy and trend-setting, simple enough for anyone to follow but impressive in its pure giddiness.

To be honest, Woman’s gravity-defying, inverted introduction earns it a place on this list all by itself. It’s as simple as that. But beyond that showstopping moment, BoA skirts through an army of backing dancers with lithe, effortless confidence.

What it may have lacked in memorable point moves, Black On Black made up for with sheer bombast. At eighteen performers, the routine was 2018’s largest. It’s a veritable army of highly-skilled dancers, attacking with full energy.

Right Here takes ample advantage of what I like to call the “domino effect,” where one member kicks off a pattern of movement that gives the entire group an addictive staccato appeal. All of the Boyz’ routines are polished down to the tiniest step, but Right Here felt like their most cohesive, memorable routine yet.

I Wanna Be A Celeb begs to be taken as a joke, but this quick-footed choreography is seriously better than many “real” idol groups. Yes, there are plenty of comedy routine moments, but when the ladies hit that sharp, fast-paced choreography for the chorus, they’ll have your jaw dropping.

Love U is not Chungha’s most technically demanding routine, but there’s something about it that I just find so charming. I’m a sucker for mixed gender choreography, and the fact that this feels ripped from some cheesy movie musical scores it bonus points. It’s a testament to Chungha’s star power that she drives the focus even with everything else going on around her. Rarely is a “cute” dance like this carried off with such panache.

Shine is probably the trendiest choreography on this list (thank god there’s no flossing…), but it has a playful rambunctiousness that really sets it apart. What occasionally looks like controlled chaos is instead an incredibly tight, humor-filled performance piece that improved an already strong song. It’s hard not to be won over by Shine’s goofy charms.

A song like Good Evening must be tricky to choreograph, but SHINee defied expectations by presenting a lyrical routine that focused on story and mood rather than showstopping moves. The result is a routine that harnesses time and pace better than any other this year. Just like the song itself, the choreography builds to a cathartic climax, uncluttered by complex configurations and driven by a shot of pure emotion.

The benefit of having a large group configuration like Golden Child’s is that there can always be something new going on in each corner of the choreography. Genie’s exuberant dance is filled with surprises, and plays with levels to create a cohesive whole that never lacks for energy. There are plenty of times where the full group syncs up for a single move, but just as often they split into pieces, with one unit offering a contrasting routine to the other. The in-unison jumps are perfectly level to the point where you could measure them with a ruler, but it’s that energetic breakdown (and side flip!) that became Genie’s true calling card. I’m exhausted just watching them.