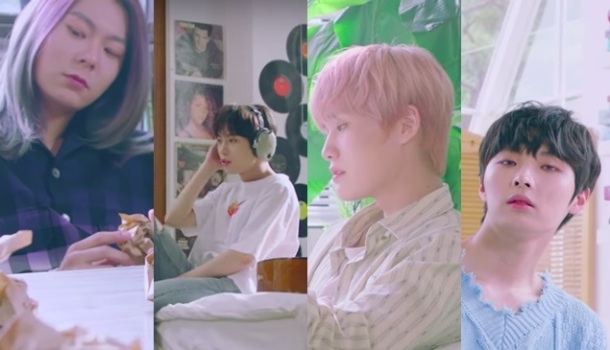 Whether they like it or not, the debut of new boy group Limitless will instantly be overpowered by the presence of Jang Moonbok’s presence in its line-up. Moonbok became a lightning rod for media attention throughout the first few episodes of Produce 101 Season Two, but the novelty quickly faded and he was eliminated mid-way through the series. He’s far from your traditional K-pop idol, but that’s no bad thing. Still, his quirkiness can be polarizing, especially when framed within a poppy, highly polished idol group setting.

Debut single Dream Play (몽환극) is anything but polarizing. With a moniker like Limitless, you’d think the guys would opt for something more unique. Instead, Dream Play is as dull as tropical K-pop gets. On first listen, my attention strayed and I had to force myself to focus and actually hear the song. That’s how it’s become with this endless tropical trend. It’s like elevator music.

On the plus side, I like how this is a smaller group. Four-member configurations are rare these days, and the guys of Limitless seem to be talented. But, you wouldn’t know it from the meager scraps of melody Dream Play gives them. The song never takes any interesting turns, treading water through the same series of notes. The delivery feels a little whiny, and that’s likely due to the fact that every phrase seems to end in roughly the same place. No peaks. No valleys. Just noncommittal, tedious song construction. Even worse is the instrumental, which pulls from every tropical sample pack imaginable and manages to dull it all into a joyless bounce. At this rate, I’m ready to book a ticket to Korea and personally destroy any equipment capable of producing this dreadful tropical mush the industry’s been stuck in for years.