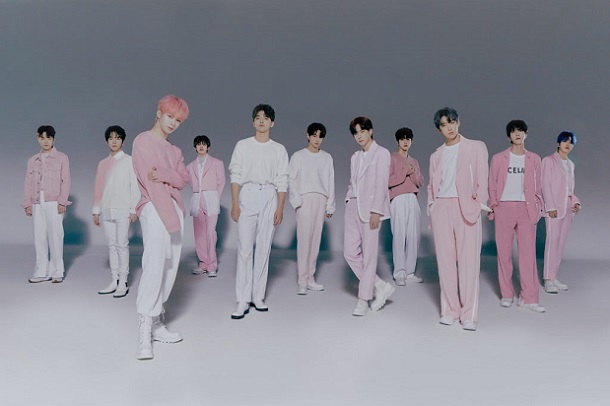 Think of Omega X as the idol group version of 2017’s The Unit: Idol Rebooting Project. The group attempts to take members of disbanded (or disbanding?) acts and bring them together for a re-debut. Its line-up includes performers from Spectrum, Limitless, Seven O’Clock, 1Team, ENOi, 1THE9, Gidongdae and even my beloved Snuper. If anything, this just goes to show how many under-the-radar K-pop groups exist. I like the idea of giving these guys a second chance, but a song like Vamos does them no favors.

To be honest, I had trouble getting all the way through this one. The struggle begins during Vamos’ first ten seconds, which bludgeon us with one of those farty brass loops, distorted and turned up to eleven. It’s an instant headache. I get that the intent here is to “go hard,” but we’ve heard this kind of audio sample so often that it’s lost all its bite. Unfortunately, the riff underpins the entire verse, growing more obnoxious as the key rises.

Vamos’ pre-chorus offers a brief respite, though its familiar turns lack any real punch. And before we know it, the chorus hits us with that trumpeting bombast once more. Apparently, the producers deemed this instrumental loop strong enough to act as a central hook, because apart from its overpowering use, there’s not really a chorus to be found. The guys rattle off errant affectations with no structure or purpose. It’s unconvincing and forgettable, and these underrated, long-suffering performers deserve more. Vamos’ stripped-back second verse gives them some time to breathe, but the song is too suffocating and banal for those moments to matter.