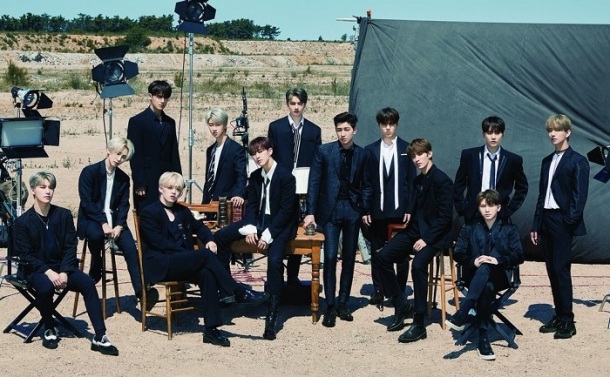 The first time through Seventeen’s new album, I was a little underwhelmed. I have a nasty habit of always comparing a group’s new work to the very best in their discography, and that makes it hard for music to thrive on its own terms. But though An Ode doesn’t offer any instant classics on the level of Very Nice or Clap, I’ve really come around to it as a body of work. Yes, the Pledis Entertainment, Bumzu-produced sound is getting a bit monotonous, but the album holds enough diversity to set it apart. Unexpectedly, I find Fear to be one of its weaker tracks.

When picking a song to feature as a buried treasure, I found myself stuck between Back It Up (from the group’s hip-hop team) and Lucky. The two songs run back-to-back on the album, connected by a similarly upbeat energy. Both push Seventeen’s music in new directions, which is part of the reason why I appreciate them. When it comes to reviews, I’m often hard on hip-hop, but it’s actually a genre I like quite a bit when it’s not beholden to trap and other overused trends. Back It Up harnesses an addictively aggressive groove, and is all the better for it.

Though I’d rank the two songs equally, I ended up deciding to feature Lucky. It brings all the members together for a potent dance track, but widens the typical Seventeen sound by enlisting the help of Monotree’s G-High. More and more, I’m eager for the group to start collaborating with new producers. I love how so much of their music is self-driven, but opening up the songwriting process to different voices might actually draw out unforeseen aspects of their talent. Lucky doesn’t go too far in this direction, but acts as a good first step. The song is slick and straightforward, forged from a 90’s club beat and blasts of jubilant brass. Most importantly, it lets Seventeen be funky again — without simply acting as a retread of past glories. More of this on the next album, please!