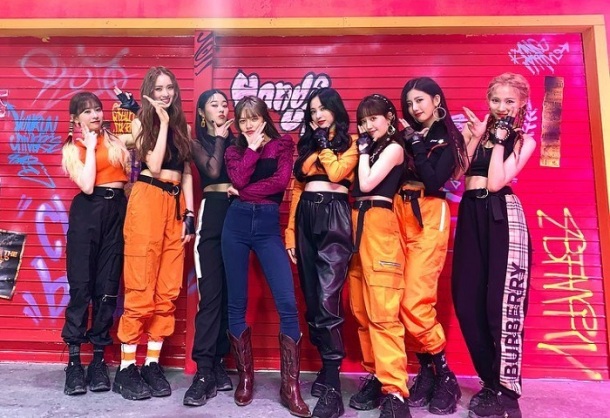 Cherry Bullet had a rocky debut year, kicking off 2019 with the popular Q&A but soon losing momentum after an underwhelming comeback and months-long hiatus. Making matters worse, the group lost three of its ten members. That’s a pretty big shift less than a year into an idol career. Still, it’s not without precedent when it comes to girl groups. What matters most now is the music they release. To put it bluntly, Cherry Bullet need a hit.

I don’t think that Hands Up (무릎을 탁 치고) is going to do much for them. Like so many of their peers, the song sees Cherry Bullet travelling down the trendy “girl crush” route. They pull it off more convincingly than many others, but the song doesn’t elicit much sparks. Hands Up heavily samples Beethoven’s Für Elise, which you will instantly recognize regardless of whether you’re familiar with its original title. I’m all for modern pop music sampling from the classics, but this particular loop is almost too obvious to work. Its repetitive use borders on cloying.

On a lighter note, Hands Up opens with one of the most unintentionally hilarious introductions I’ve heard in some time. To me, the production on this vocal riff sounds like an autotuned K-pop vocaloid quickly running out of batteries and flatlining. It makes me giggle, which probably wasn’t the intention.

From here, the track finds its mid-tempo trap/hip-hop groove and pretty much sticks to it. The vocal performance is solid and full of personality, but the song’s structure doesn’t give the girls much to do. A minute in and it’s basically unveiled all of its tricks, making the remainder of the track a more tedious listen than it should be. I kept waiting for the production to explode, but rather than offer a sense of genuine growth, Hands Up constantly retreats to its ho-hum chorus. This will probably be enough to keep Cherry Bullet’s career afloat, but it’s definitely not the kind of breakthrough they need.