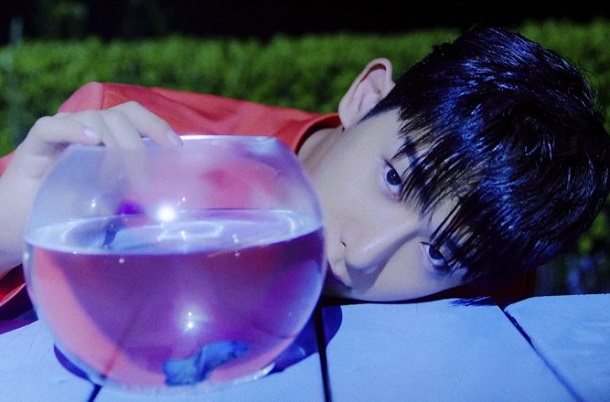 Without being a massive, in-the-know fan, I’m consistently surprised at how different Wonho’s solo work has sounded from the bulk of Monsta X’s discography. When it comes to title tracks, he’s opted for a much softer sound, making me curious how he felt performing the harder-edged material that came to define his former group’s singles run. Whatever his thoughts on the matter, he’s clearly in control of his style and we’re all the better for it. The one-two punch of Open Mind and Lose effortlessly wove global influences into a sleek dance pop package that fit Wonho as snugly as those tight shirts he loves wearing.

For new single Blue, he’s moved even further into pop territory. This is easily the brightest, lightest title track he’s delivered yet. That’s both an asset and a liability. On one hand, the bubblegum funk sound matches his airy tone well. Yet, both the vocals and production are so lightweight that they threaten to diffuse into wisps of cotton candy. Blue would have benefitted greatly from a grittier performance to counter its sweetness. A climactic synth breakdown brings some texture, but I would love to hear it dispersed more evenly throughout the track.

Melodically, Blue opts for a wordy, fast-moving chorus that rushes forth like a waterfall of hooks. This technique was used recently in Katy Perry’s Never Really Over to similar effect. I’m fond of the structure, though its pinwheeling nature only adds to Blue’s ephemeral nature. The song is too jaunty and amiable to dislike, but I fear how it will age.