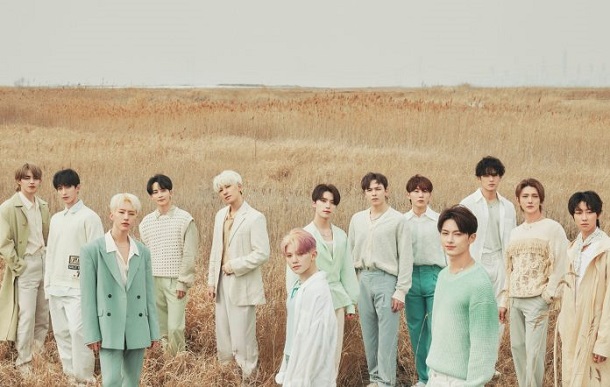 It seems every big K-pop group must have their English-language single these days — or at minimum a song directly targeted toward international markets. This is an exciting development for many, but it comes with its own challenges. I don’t begrudge K-pop artists’ global success. I just hope they find it on their own terms rather than sacrifice individuality for mass appeal.

HYBE has a way of literally shaving the individuality off its artists with heavy-handed vocal mixes, but thus far Seventeen have remained mostly exempt from this assembly line processing. Their first English-language single Darl+ing is composed by the usual suspects (Woozi, Bumzu) and pulls Bias List favorite Hwang Hyun into their orbit as well. So far, so good! And… by and large, Darl+ing sounds like a Seventeen song. This is also good. However, it’s not a particularly great Seventeen song.

Hmm… not so good.

Darl+ing boasts a few stunning moments. Its pre-chorus is all sorts of dynamic, emulating the shot of drama that made tracks like Don’t Wanna Cry such durable classics. I’m willing to bet Hwang Hyun had direct influence on this section, as the theatrical synth textures feel like missing pieces of a great ONF song. It’s sad how quickly this excitement gets ripped away, replaced by one of those awful anti-drop choruses that opt for chill vibes over anything remotely compelling. At least seventy-five percent of Darl+ing succumbs to this strummy groove, resulting in an inert hook and forgettable verses. We know Seventeen can bring more to a song than this – pre-release or not.

I don’t get the sense Darl+ing is meant to kick off a massive Western push. After all, Seventeen already have tons of global appeal. It feels more like a gift to their existing fan base. Still, I can’t imagine a track this vanilla acting as an engaging entry point for anyone curious about the group. Hopefully their upcoming album delivers a bolder statement and fuller showcase of their considerable talent.