2015 saw the rise of its fair share of super rookies. Some were predestined to be huge, and some were surprises. But, for every breakout success, there are dozens of groups slowing clawing their way to the top. Some make it, some fail. And some produce music that’s better than the big boys. Let’s take a look at what I think are the five most promising rookie groups that haven’t enjoyed the instant super stardom that they deserve. I already took a look at the boys. Now it’s time for the girls!

The girls have only released one song so far, and that’s part of what worries me. As good as The Light was, it didn’t receive a lot of attention and The Ark has been unable to build on their brand through further releases. They have so much potential and just need to find the right track (and then actually release it!).

Despite being part of the one of the biggest agencies, CLC under-performed big time in 2015. This is especially unfortunate because both of their mini-albums were very solid, and should have seen them find more success. The girls seem to have the whole package, but they haven’t been able to stick out in a crowded market. 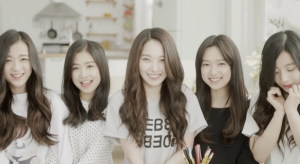 I worry about April. They’ve already lost a member (their leader, no less) and their agency is reeling from the loss of Kara, their major bread winner. I’m pulling for them, because their youthful bubblegum sound has been right up my alley so far. 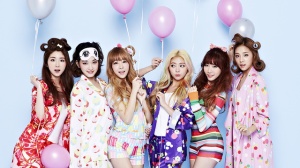 Title Tracks: Pit-A-Pat, What About You, Sugar Sugar, Aalow Aalow

Laboum have steadily been gaining my attention (minus the regretful Sugar Sugar), and I’m ready for them to cross over into another level of success. The ridiculously fun Aalow Aalow should have done it, but maybe it’s just their opening volley in a string of upcoming pop-fueled hits.

I have faith that Oh My Girl will eventually make it to the big leagues, but I’m a bit sad that they didn’t burst out of the gate in 2015 like a Twice or GFriend. I’m very fond of their agency, and both of their singles have been super solid (if completely different). I’m confident that if they sort out what concept they’re going for, they’ll quickly find their path to the top.